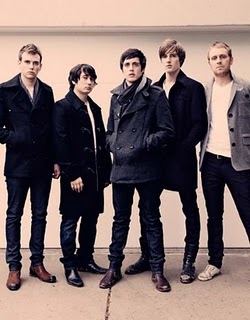 From performing New Years Eve in Times Square with the likes of Lionel Richie and Taylor Swift to having their song “She Is Love” placed in a national ad campaign, the five-piece Virgina-based band is doing pretty well for themselves. Hard to believe that just a year ago the now college grads were traveling to LA during breaks to record their debut album.

Frontman Will Anderson’s smooth vocals, combined with the band’s radio friendly pop rock sound (often compared to Maroon 5 and The Fray), is sure to make the girls swoon, if they haven’t already. Not to mention, having toured with the likes of Jon McLaughlin, O.A.R., Switchfoot, Duffy and Matt Nathanson, Parachute is well on their way.

With debut album Losing Sleep hitting shelves May 19th their lives are only getting busier. Read on for my interview with Will Anderson as he chats about the recording process, stories behind the romantic songs he has penned, and what it’s like being in a band with his four best friends.

What can fans expect from Losing Sleep?
It’s a lot of new songs they haven’t heard yet, new material that we’ve been playing live but never had a recorded version of. It’s the same sound they’ve heard live, but it’s finally put into recorded mode. We have 10 great songs that we’re all definitely really proud of.

How was the recording process? Was it everything you hoped it would be?
It was a little tough because we were in school so it took a while. Once we got out of school we really got into it this past summer. It was good to work with the producers that we did. John Shanks (Bon Jovi, Sheryl Crow, Jane’s Addiction, Stevie Nicks) and John Fields (Switchfoot, Jimmy Eat World, The Jonas Brothers, Miley Cyrus), to see the body of work that they’ve worked on. They took our view of recording and helped us shape what we wanted it to be and what kind of record we wanted it to be as it went along. It taught us a lot about the art of making a record.

What’s the story behind first single, “She Is Love?”
I wanted to write as straightforward a love song as I could. It really just came to me and took 10-15 minutes to write. We didn’t think it was going to be anything and it really took on a life of its own. A couple of people heard it, our manager and friends, and said we had to put it on the record so we did, not thinking there would be a reaction. Then Nivea picked it up for their ad campaign and it was a great opportunity. The reaction was so incredible that it segued into being our first single. It was a pleasant surprise and the song definitely had a journey that I did not expect it to once it was written.

What is your typical writing process like?
I have a really weird sleeping pattern so at midnight I’ll start writing songs. Ninety-five percent of the time it’s stupid stuff that I write and I usually give up after about a half hour. But on a night that something good does come up it’s one of those all-nighter things where at 5 ‘o clock in the morning I’m banging on our drummer’s door, screaming, “I got a good song! Listen to this!” and wake him up and make him listen to it. It’s usually an all night sort of trance where I go into the zone and knock it out as quickly as possible.

Often, I’ll come back and rewrite all the words in a few weeks once I realize how terrible the idea was. Usually the music comes first and lyrics come later. But you definitely know very quickly if it’s a good song or not. I’ll have the entire song laid out, the lyrics and the melody and then the guys will add their opinions to it. It’s just a matter of they add their little twist to it eventually.

I really like your song, “Under Control.” What was going on in your head when writing it, what inspired it?
That’s a funny song. I used to do this thing where I’d advertise for shows and I would go into sororities and sing to the girls. I wrote that song with the melody and I had this crush on this girl for probably about three years all through college. She had no idea who I was. So, I wrote that song in the off chance that she would hear it and realize it was about her. But unfortunately, she did not and she still does not know who I am. I don’t think she has any idea that she has that song written about her. It was definitely for that one girl who I met at that one sorority.

How much are your songs inspired by real relationships vs. fantasy?
It goes both ways, it depends on the song. Certain songs are very true to something that’s happened to me and other songs I think of something or make a story based off that. For me, it really comes down to a song and the individual. It depends. Sometimes it’s about me or it’s about someone I know or about a fictional thing if I happen to think of a good story.

Would you rather someone hear you first live in concert or your new album?
I think live is always the pinnacle for us. That’s what we want people to know us from. We want people to see us. We want to make a great record, but I think in the end, if you can come see us live I think that’s where you can get hooked. Anyway is fine in the end. We’ll definitely do anything to make sure people hear the music and connect to it in some way. For us, it’s more fun at a live show. To be with people and to be listening to the people and hanging out with everybody and just having a good time, you really can’t beat that.

You performed in Times Square for New Years Eve. How was that experience?
It was insane! It was unbelievable. We got a call two weeks earlier saying, “Come to New York and play Times Square.” It was really random. We were like, “Okay. Are we playing the side stage?” And they said, “No, you’re playing the main stage.” For us to sit there, this little college band of guys rolling up in a van and playing with Lionel Richie, the Jonas Brothers and Taylor Swift. Love them or hate them, those are just huge names and to share the stage with them was amazing to us. We were very fortunate and it felt surreal when we were up there. It was probably one of the most amazing experiences in my life, playing for that many people.

You all grew up together playing in high school and college. What is the band dynamic? Has it changed at all since you started?
You know, in the end it’s so funny because it really is almost exactly the same as it was. We’re all the same people and same guys and we’re all still the same friends. If you knew us back then and you know us now, it’s very similar. Obviously we’ve grown up and things have changed a bit. But, in the big scheme of things we’re the same guys and we know a lot of stuff about each other that we probably wouldn’t know if we hadn’t known each other for that long. For better or worse, it’s definitely the dynamic of five best friends who have known each other forever. I can’t imagine doing it with people who weren’t your friends. It’s weird for me to think about that.
You can watch the Nivea c
ommercial featuring Parachute’s song “She Is Love” as well as the full version from their performance New Years Eve below. Be sure to visit them on MySpace where you can pre-order a copy of their album, due out May 19th.

I know, awww, I LOVE this guy! Sparky's Flaw haha what a bad name, I am so glad they changed it.

I know, awww, I LOVE this guy! Sparky's Flaw haha what a bad name, I am so glad they changed it.

I LOOOVE WILL HE IS SO CUTE! how old is he?

Will is so fine! I saw him in concert Saturday at the Masquerade in Atlanta.<3 He is so nice too, I loved talking to Parachute.

i love theses guys there amazing live as i saw them on there uk tour in Birmingham they played with not advised and my fave boys the echoes 😀 will, kit, well all of them are real nice to talk to 🙂