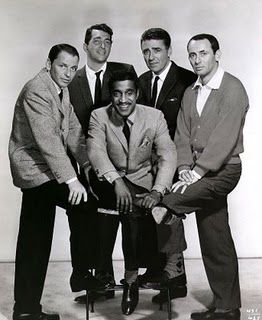 While I’m sure many of you music lovers out there have heard of the Rat Pack, which featured prominent musicians Frank Sinatra, Sammy Davis Jr., Dean Martin, Joey Bishop and Peter Lawford, there may be some who have no knowledge on this talented quintet. The Rat Pack played predominately in the early 1960s, appearing together onstage and in films and it would definitely behoove you to check them out (there’s plenty of videos on YouTube).

I can’t tell you how many CD’s by the members of the Rat Pack I’ve bought my parents over the years, so when they told me about a show tonight focusing on the music of these immensely talented artists, of course I said I’d go.

This brings me to this week’s song of the week. One of my favorites from Ol’ Blue Eyes aka Frank Sinatra. Watch the video below of Sinatra performing “Fly Me To the Moon” at the Kiel Opera House in St. Louis on Father’s Day 1965. The words just seem to roll off his tongue with such ease. What do you think? Do you have a favorite song from the 60s?