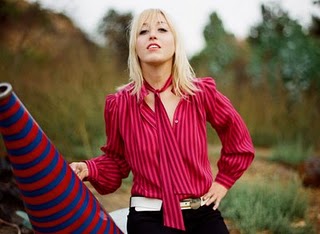 Sassy and comical singer-songwriter Anya Marina chatted with me right before her acoustic afternoon performance at Cedar Street in Austin, Texas. With a cup of tea in hand and a pre-show meal of goat yogurt and a bag of mixed nuts, Marina spoke candidly about being told she’d never make a career singing, recording shirtless and having a breaking feature in Rolling Stone: “I was so shocked when I heard. I just got an email one day that said, ‘Rolling Stone wants to do a breaking feature.’ In the words of Rachel Zoe, I died.”

I love your song “Move You” and was curious to the story behind it.
My Dad’s a psychologist so Carl Jung and Joseph Campbell and Freud and people like that were always discussed and studied in our house. There’s this Carl Jung quote that I’ve talked about a lot that inspired the idea behind that song. The quote is, “Often the hands will solve a mystery that the intellect has struggled with in vain.” I love that idea. When you can’t wrap your mind around something and you can’t figure it out, whatever Rubik’s Cube issue you’re struggling with, sometimes it’s best just to put it on the shelf and go do something physical. I just like the idea of not over analyzing, which I’m guilty of all the time.

What’s your writing process like?
I don’t really write on a regular basis, especially now that my schedule is so unpredictable. I just write when I can, but I’d like to have a regiment. Wake up, have a cup of tea, sit down and sort of woodshed and tool away at it. But, it becomes so difficult to do that when you’re on tour or you’re playing festivals and you’re in a different city everyday. I just try and do it whenever I can. Usually, I come up with a melody when I’m walking or driving or doing something and then I’ll come home or record it on my phone and try to remember it that way.

I read in an interview that you recorded one of your songs topless in the studio.
Shirtless! I was wearing a bra. [It was] “Afterparty at Jimmy’s.” I did that song with Brian Karscig and Mark Maigaard from Louis XIV. I couldn’t get the right vocal take, so there’s another example of going into your body when you can’t arrive at the right place or the right answer — take your shirt off, sometimes it helps. And that’s the take that we got on the record and I think you can hear the rawness and dirtiness of it.

Would your rather people see you live or hear your album first?
I can’t really be objective of myself. I am so proud of the record that I would love for people to have it and hear it and get into it. I think it has a lot of legs. You can listen to it over and over and over again. I still find things in it that I’m surprised by or I’ve forgot about or even that inspire me. I really love my album; I’m so excited by it! At the same time, I think the live shows are a totally complementary experience. At least for the most part, the shows are not necessarily your typical straight ahead, “Let’s do eight songs in a row show.” I like to engage the audience and connect with people and tell a story or two. So, both.

Your doctor told you that you’d never make a career out of singing.
That was a silly little anecdote, but yeah, I have had a doctor tell me that. “You have a very tiny larynx, you have the larynx of a 14-year-old adolescent boy,” that’s what he told me. Oh well, I guess he was wrong. I think I’ve surpassed that. I’ve had a lot of people in my life urge me not to go into music or radio or acting because I had a very strange, sort of unique voice growing up. Now it’s come into its own. But, I was teased for a lot of years about my voice; that it was scratchy and high and nasally and all that stuff. I don’t know why I pursued it.

Don’t you find that when somebody tells you that you can’t do something you either sink or swim? You either get angry, which is a great motivator, or you get even, or you don’t and you just cower and shrink in the corner and not do anything. The secret is — just do it. Everybody talks about, “How do you break into blah blah blah? How do you do this?” Just do it! You make no money for a while and you just do it. You just get a gig doing open mics.

Is that how you started?
I was in a band back in college. My friend was like, “Will you sing for us?” That’s how I started. I was like, “You’re crazy, I can’t sing.” Pretty soon I’m writing their songs, which was really fun.

Where do you find inspiration for your music? Do you carry a notebook everywhere you go?
No, I have napkins and pieces of paper. I get really inspired by everything from fashion to comedians to; I just listened to this Patton Oswalt CD the other day on tour and that was really inspiring. For the content of my songs, it could be anything. It could be a friend telling me a story of some drama that happened in their life. I really do get inspired by anything. It’s really important for me to travel and go see films and constantly be reading and connecting. I really need to get a good book, I’ve been slacking.

How do you stand apart from all the bands out there?
I’m way taller. I’m 5’3”. I’m prettier and taller; my voice is louder. I have stripes on my face, that sets me apart and I’m funnier than 90 percent of these assholes. Also, I have a bag of nuts and I don’t think anybody else here has that so they can go suck it [laughs]. I’m just happy to be here.

For more on Anya, be sure to visit her on MySpace and catch a show when she’s in town! She’ll be touring with Jason Mraz and The Virgins this spring.

You can read this interview originally posted on MarieClaire.com here.