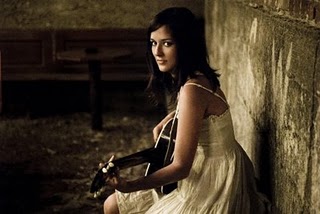 I caught up with singer-songwriter Meiko shortly after her Wednesday afternoon showcase at South By Southwest. From having her self-titled debut album hit No. 1 on the iTunes folk chart to being a featured artist on the SXSW homepage, 2009 is definitely the year for this songstress and she couldn’t be more content. “I’m really happy that things are being well received and I’m happy to be here again and I’m happy that I have fans. I’m going to keep on doing what I’m doing and keep on making music and hopefully I’ll have people to listen.”

Touring with the likes of Joshua Radin and the Hotel Cafe tour, Meiko appropriately describes her music as indie pop-rock folk. Read below for my interview with Meiko as she talks about South By Southwest, her music and adjusting from living in a small town in Georgia (population 808) to the busy city of Los Angeles.

Is this your first time at SXSW?
This is my third time. It’s been really cool. I don’t feel like a veteran really; I still feel confused as to where everything is. But I know that I really love Austin so it’s nice to be in the city and eat the BBQ and hang out with the locals.

Do you prepare for the festival any differently than your typical performances?
Not really. I just call around to all my friends and am like “Hey, are you in town? You want to play the show with me?” It’s just a cool time to get together with old friends and play music, which is pretty much what it should be.

What would your advice be for people who have never been to SXSW?
I would say get the wristband so you can go to all the cool shows that you want to and I’m sure it helps to be over 21. A lot of the places are 21 and up. Check the weather. I was packing all kinds of pea coats and big boots and stuff but someone told me it was so hot here and it was cold a couple weeks ago. So bring a lot of sundresses and girlie, cute stuff.

I read that you used to have stage fright.
Yeah. I don’t really anymore. When I started singing in public I was about eight-years-old and I was very, very, very freaked out. I always thought that people were against me. When I was singing I would think, “These people hate me” and “Why am I doing this to myself?” I hated performing in front of people, but it was something that I would make myself do. It was something I wanted to get over because secretly I enjoyed it, but I got so nervous.

When I moved to LA I asked a lot of people’s advice and they would say play as many shows as you can because that’s how you get over it. So, I took that advice and I played as many shows as possible — playing in somebody’s living room. Eventually things got better and I started really enjoying playing in front of people. I always take advice from my friends and one of them said, “Maybe you should say thank you after a song or try to say something and introduce a song” because I would just play song after song after song. That’s where it started that I was more comfortable and I felt like the crowd was on my side — when you have that open communication. I love talking to the crowd now.

Do you ever hold back as a songwriter because each song is like your diary?
If it’s anything super personal, I write in a way where the listener may take a completely different thing from it. I don’t give the whole story, but I give enough where it makes me feel satisfied that I have completed the song without giving too much away.

I love your song “Boys With Girlfriends.” What’s the story behind it?
I was really good friends with a guy. He was my best friend and he had a girlfriend that really got jealous and thought something was going on between me and him when there wasn’t anything. It was a very innocent and awesome relationship and she got in the way a lot and eventually she sabotaged my friendship with her boyfriend. I was very, very, very hurt by it. I don’t have my friend anymore, but I have a song. The even trade I say, which I don’t know if it’s that even.

You used to waitress at the Hotel Café in California and then eventually started playing there. How did that come about?
I played there once before I started waiting tables there and I met the owners and told them, “I love this place so much! One day I’m going to ask you for a job and you’re going to have to give it to me.” About a month after I said that to them I had gotten fired from waitressing at this Indian restaurant and I called the Hotel Café owners and said, “Hey, remember a month ago when I said if I needed a job for you to give me one? Well, I need one.” They were very cool about it and they hired me as a waitress and the rest is history really.

What’s your advice to people who want to make a career in the music business?
I always tell people to get a job. Get a job anywhere involving music and it’ll inspire you being around all that music and it really connects you with people. Not just networking and giving out your demos, but you actually establish friendships with these people and that’s what happened with me. When they needed someone to play or someone canceled they’d say, “Hey Meiks, can you fill in for so-and-so” and I’d be like, “Of course I can!” And that’s just the way it happened and it was awesome and I loved it.

One of your songs was featured on “Grey’s Anatomy.” Did you watch the episode?
I did! It was awesome! I’m a big fan of “Grey’s Anatomy” from the beginning so it was really cool. It is crazy to me how well songs are placed in shows like that. It was amazing at how good they are with what they do. I actually got to meet Katherine Heigl the other day. I didn’t have the guts to say, “My song was in your show.”

You’re signed on MySpace Records. Do you feel as an artist you need to be on a label?
No, I don’t think you need to be on a label at all. I think the cool part about these days is nothing is set in stone and there’s no exact formula for doing anything. I considered staying independent and not signing with a label. The reason I did sign with a label was because the whole reason I’m playing music and getting it out there is because I want as many people as possible to hear it. I figured I could only do so much by myself and it made sense to sign with someone that are marketing geniuses. MySpace.com has been insane for the music industry and so I went with them because I knew that that would help the awareness.

Do you have a dream collaboration?
Yeah. I would love to work with the guys from The Postal Service. It’s just so cool what they do and all that electronic stuff. That would be really cool.

Was there a moment that you thought to yourself, “Okay, I’ve made it”?
No, no! People are always like, “What’s it like? You’ve made it!” I don’t know if I really feel like I’ve made it. The moment that I do feel like
that is when maybe I can sit in m
y backyard by the pool or something and, not necessarily money wise, but just where I can be comfortable and happy and proud of what I’ve done and I don’t think I’m done yet. I feel like I’m still truckin’ along.

What motivates you as a musician? When you were waiting tables, what kept you going?
Seeing everybody else living their dreams — that was motivational. I watched a lot of really cool bands come through there. It was cool to hear the different songwriting styles and the different personalities onstage. It was really inspiring to me and it made me want to go home and write and it made me want to play more shows. And what still motivates me now is seeing as many shows as I can see. Definitely with South By Southwest that’s what I’m going to do.

What’s your typical songwriting process like?
I try to carry a notebook, but I rarely write in it. I sit in my house. I have a lot of guitars so I keep a guitar out and about in every room, which doesn’t say much because I live in an apartment. But I keep one in the living room, keep one in the bedroom and whenever I have an idea or I’m bored I’ll just pluck away at something and then I just come up with something. It’s not like a certain time of the day, so I don’t really have an exact way of doing it.

You’re originally from Roberta, Georgia where the population is 808 people. How big of an adjustment was moving to LA?
It was really difficult. It was pretty scary to come from a tiny town where everyone knows you and you feel really safe. There’s no crime. And then you move to LA. It was very overwhelming. I was really scared to leave my house for a little while. In a small town you grow up with all these ideas of how big cities are. I’m thinking, “Oh, I’m going to get mugged.” And eventually I got out and I did wake up in the morning and get a cup of coffee by myself and I started meeting people and it got a lot better. It has taught me that these ideas that you grow up with aren’t always right. I go back home and I talk to my friends and they’re like, “I could never live in Los Angeles, it’s so crazy!” and that’s what I thought, but I did it and I love it now. I’m a big cheerleader for LA. 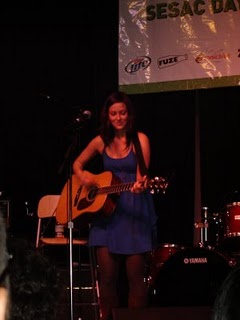 Be sure to give Meiko a listen on MySpace and catch a show when she’s in town!

Annie – super-jealous you got to interview Meiko. She’s awesome. It’d be nice to meet her someday.
Thanks for introducing me to her music, and keep up the good work!
– Chris

Unfortunately missed her in Oz recently, fingers crossed she'll head back this way