It’s really crazy to think that exactly one year ago today I began my blog. Originally, I started You Sing, I Write as a creative outlet since my current day job didn’t (and still isn’t) writing-related. Growing up, I always knew I wanted to be a writer, just not sure what field or genre until my senior year of college. When I landed my internship at MTV News Online I knew for sure that becoming a music journalist was my career goal. Little did I know how competitive the field was and with the current job market, the outlook doesn’t look too promising. So, to keep up my writing and creativity I thought, “Why not start a music blog?” I go to tons of concerts throughout the year, might as well cover them and try to get interviews with each band.

The History:
It was the middle of October and I already was planning to see Switchfoot at Hammerstein Ballroom with a bunch of friends, so I decided to contact their management and see what I could do. Surprisingly, within 24 hours of emailing I received a response back and was able to set up an interview with the band. Lucky for me, MTV was just launching it’s own concert blog so I began covering shows and writing up my reviews for them as well as my own blog. Everything spiraled from there and soon I was doing phone interviews with bands on my lunch breaks, getting CD’s sent to me in the mail on a weekly — sometimes daily — basis and the rest, as they say, is history.

This past year alone I’ve conquered some of my life goals, strange enough as it may seem. I lived my own version of Almost Famous when I went on tour with Army of Me for a few tour dates. That experience was like no other and I was able to meet and interview not only each member of Army of Me, but another up-and-coming band, Lights Resolve as well as interview Jeph from The Used on their tour bus. Looking back, never in a million years would I have dreamed my blog would have taken off to where it is today and there is still so much I want to do with it within the next year!

Of course my goal is to eventually have a full-time writing gig somewhere in New York, or maybe California. Hey, even Nashville sounds pretty nice at this point too, who knows. But for now, I couldn’t be happier. I’ve been introduced to some amazing bands this past year and hope you all have enjoyed my interviews and reviews of each of them. While I can cross off going on tour with a band on my life “to-do” list, I hope that in the near future I can have many more amazing touring experiences and be able to vividly capture and chronicle each tale on this blog. I hope you continue to read and look forward to the new bands I feature each week. Thanks for all of your support and continuous comments throughout the past year. Keep them coming!

And, for being such loyal readers, I want to invite you all out to Maxwell’s in Hoboken on November 8th. I’m planning a concert with three amazingly talented bands that I think you should all spend some time getting to know — Josh Charles, Joey DeGraw and The Canon Logic. Check them out on MySpace and hope to see you Nov. 8th! 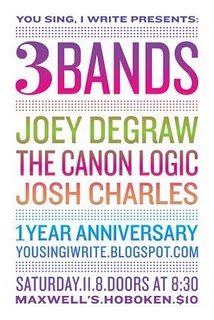 2 replies on “You Sing, I Write Celebrates 1-Year Anniversary!”

Happy Anniversary!! Good things happen to good people…I know you worked hard for this 🙂 By the way, check me out on November 6th on the MTV EMAs 2008. I will be part of a fan pilgrimage to Liverpool. You can see vids from Oct 28th on http://www.fanwalk.tv

Keep up the good stuff!

happy anniversary, Annie! keep up the great work on your blog. you’ve really developed it, and you should be so proud!! can’t wait to see what your second year on the job brings..