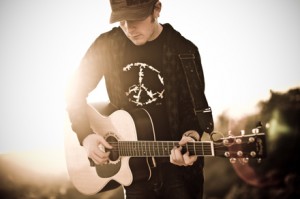 Singer-songwriter Jason Reeves is perhaps most known for his co-writing efforts on MySpace sensation Colbie Caillat’s debut album, Coco. But not for too long. While Colbie’s radio hits “Bubbly” and “Realize” were co-written by Reeves, his major record debut will surely earn him a reputation of his own. Being released digitally August 12 and in stores September 9, The Magnificent Adventures of Heartache (and other frightening tales) is sure to impress. If you haven’t yet, be sure to check Jason out on MySpace and to learn more on the singer-songwriter and his upcoming album, read below for my email interview with him. I’d love to hear what you think!

I love your single, “You In A Song.” What was the inspiration behind it? (To listen to it for Windows click here, for Quicktime click here.)
“You In A Song” was inspired by me always having to leave wherever I was. It’s a song about somebody you love being stuck in one place, while you are stuck on the move. With the sentiment that you can take them with you wherever you go in a song.

What is your typical writing process like? Do you carry a pen and paper wherever you go?
There is no certain way or process to writing for me. Every song comes out of somewhere else in a different way. It’s random really. And I do carry around pens and paper though. I wish I had a typewriter that fit in my pocket though, because they’re much more fun to write with.

How was the recording process different, if at all, on this album than your previous albums?
This is actually my fifth album, if you count the Hearts Are Magnets EP as one. And the last two have been very different because they were made in California at Revolver with Mikal Blue. Before that I was making them in a basement in Iowa. There’s a limitless feeling now because of all the incredible musicians I’m lucky enough to play with. With the new one though, I was getting a lot more comfortable in the studio. It takes a long time to learn how to record your music the way it is in your head. I feel like I’m getting closer to the two being the same.

I love that one line in “Never Find Again” — “You still say that love is nothing like it should be/Isn’t like the movies where everything goes right…” What were you thinking when writing the song?
That song is about the fear of falling in love and how one person is always more afraid than the other. I wanted to make it an argument between the two people. One scared as hell and one completely fearless, or at least on the surface.

Two of your songs are a bit shorter and different from the others: “Sunbeam Lights” and “The Fragrant Taste of Rain,” where you talk throughout, almost a slow rap-like part of the song. Both seem like they end with an open ended question. How did these two songs come about and how do they relate to the rest of the album?
Those two songs are transitions of sorts in the story. Just as every song is, but they are specifically meant for that. To bridge the stages I guess. And they came out randomly in the studio, just messing around and capturing accidents on the microphones. “The Fragrant Taste Of Rain” is simply a one take of me singing/saying a poem I’d written while playing an extremely old piano from the 1800’s. I had no idea what I was doing and I like that about it.

Your songs are very optimistic and relatable and just have so much honesty. I read a quote from Colbie Caillat talking about co-writing with you on her last album and she said, “Jason is a total, hopeless romantic. So he’ll have an idea for a song, and it’ll be about love.” Where do you draw your inspiration from?
I think I’m more of a hopeFUL romantic. But inspiration comes from every little thing. Everywhere and always. Mostly falling in and out of love.

Do you draw more inspiration for lyrics by being in a relationship or after a break-up?
Both situations are amazing for writing because they’re opposite highs. One being very up and one being very down. The heaviest songs come from the break-ups though.

Tell me about working with Colbie Caillat. You helped writing on much of her album, Coco, including current radio hits, “Bubbly” and “Realize,” what was that like?
Writing with Colbie is my favorite. She was my first friend when I moved to California and we started making music the first night we met. It just feels so natural and easy with her.

MySpace and iTunes have spread quite a buzz about you, how has that affected your career?
Myspace and iTunes have been incredibly important in getting my music out there. And they’ve both been great to me. It’s so overwhelming how quickly the internet changed the whole music game. There are completely different rules now, and they are continuously changing.

What is your advice to aspiring singer-songwriters?
My advice to anybody is that you cannot be impatient with your dreams. It takes a great deal of time and work to get to where you want to be. And you have to give all of yourself to it.

Have you always wanted to be a singer-songwriter?
I didn’t want to write songs until I was 17. I got an acoustic guitar for my birthday and was just discovering Bob Dylan and James Taylor.

How would you describe your music to someone who has never heard it before?
I would say it’s new folk. And that it’s honest.

Check out this interview Jason Reeves did with ArtistDirect.com…good stuff! – http://bit.ly/bsnj6I

Thanks for sharing! Great guy. Can't wait for the new album 🙂