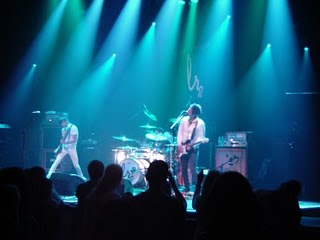 I’ve been to many concerts over the years, and you can usually tell right away whether or not the band onstage loves what they’re doing. Saturday night was no exception. Within seconds of taking the stage, it was clear that New York-based band Lights Resolve love every aspect of playing music and that didn’t falter throughout their entire set. Whether it was guitarists Matt and Sherman jumping around the stage while playing, or drummer Neal smiling continuously all while hammering at the drum kit, Lights Resolve’s passion and exhilaration definitely had fans clapping and singing along during most of their performance.

I caught Lights Resolve’s show last Saturday at Maxwell’s in , and afterward they gave away tickets to their concert this past Saturday at the Blender Theater in . From jumping into the crowd while playing guitar in the middle of their set to bringing fans onstage to help out with a song, Lights Resolve kept Maxwell’s enthused throughout their nearly one-hour, intimate set. Obviously, I couldn’t help but see them again and brought along a few more friends this time. 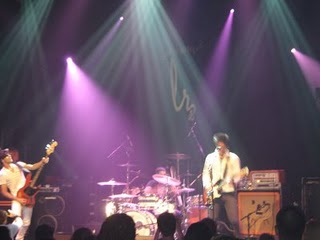 Though their set in was a bit longer, Saturday’s set didn’t disappoint. In fact, I think the bigger stage and venue only helped their performance. Starting out the night with guitar-driven song, “The Hills and Michael Jackson” off of their most recent EP Currency, Lights Resolve brought their soaring energy and prowess to the stage in . At times, bass guitarist Sherman played his red guitar high in the air with more enthusiasm than any bass guitarist I’ve ever encountered.

While their set mostly included previously released material such as fan favorite “Lost and Jaded,” Lights Resolve showcased some relatively new songs – which fans seemed very receptive toward – often starting out much faster with their percussion and guitar features. “You’re making us feel like we’re at home,” told the crowd. Songs like “This Could Be the Last Time” and “Another Five Days” had strong instrumental features either in the intro or middle of the song, sometimes both. 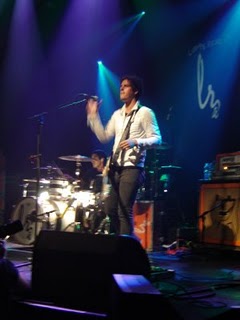 The night started out energetic with three faster paced songs before the band began “Another Five Days,” a relatively slower track compared to their previous. The slow guitar and bass accompaniment in the beginning of the song flowed well and segued nicely into frontman Matt Reich’s vocals while the eerie blue and green lighting surrounding the three bandmembers greatly helped the ambiance throughout the song. 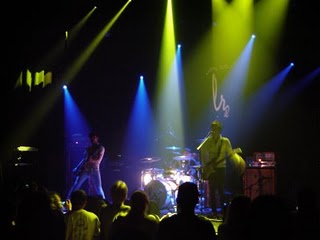 While the guys of Lights Resolve explain their music as being atmospheric and theatrical, the band also encompasses a strong rock sound that cannot be disguised. For a three-piece, they are as solid a band as they come – the intensity and energy never wavering or fluctuating throughout their set. Native New Yorkers, Lights Resolve will be playing gigs around the city within the next few weeks, and I think I just might have to see them one more time.

Be sure to check out Lights Resolve on MySpace if you haven’t yet, catch a show when they’re in town and let me know what you think!