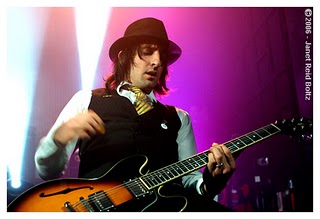 I was lucky enough to interview Sugarcult guitarist Marko DeSantis after a concert at Starland Ballroom in Sayreville, New Jersey last year. You can check out the article I wrote in the link above. Below is the entire interview. Enjoy!

What bands inspire you and who do you listen to?
I always say, taking history is just as important as making history; in that I mean that it’s great to go back and rediscover music from the past, but you can’t discount the music being made in your own generation. I like bands that are rooted in the tradition of rock n roll, but update it and push it forward; that’s what Sugarcult is about. Lately I’ve been listening to a lot of new bands: The Adored, TV on the Radio, The Strays, Maxeen, Against Me; and always diggin’ old jams by Tom Petty, Smashing Pumpkins, The Clash, Superdrag, The Cars…

Where do you find out about new bands if the radio is too commercialized for you?
Truth be told, I’ve never really listened to commercial radio; growing up it was all about going to shows, word of mouth, mix-tapes, magazines, hanging out in indie record shops and digging through the racks. Today it’s not much different, but things like iTunes, websites and file sharing just make it easier to get turned on to stuff. My favorite way to discover a band is to see them play live and unexpectedly be blown away by undeniable greatness!

What inspires your music?
There’s an old quote attributed to John Lennon, “Life is what happens when you’re busy making other plans.” I think the same thing can be said about creating music; you set out to document your experiences and what’s in your head and then it becomes something else bigger than the sum of it’s parts.

What is the main theme of your new album, Lights Out?
Escapism and the guilty pleasures people indulge in that bring temporary happiness but are ultimately self destructive; casual sex, drugs, pop-culture, etc.

How is this album different from your last two albums?
Each of our records stands up on it’s own; we like it that way, we don’t want to be redundant and puke up the same old same old. On Lights Out, we broke new sonic ground, we nearly killed ourselves in the studio trying to make sure the music and lyrics were the best they could be; Tim practically had a nervous breakdown, he grew a beard, never changed his clothes, the whole nine yards!

This album seems to take on more of an anti-radio argument, how so and why?
I guess after 5 years of doing this professionally we’ve had our hearts broken enough times to see that there’s a reason it’s called the “music business” and not the “music friends”. It’s all so political, but at the same time we can look on the bright side and be happy that good music is getting a fair shake: the White Stripes, the Killers, U2, Tool, etc. It’s just sad when places like Philadelphia and New York City don’t even have a station that plays rock music anymore.

Are there any venues or audiences you’ve hated playing for?
We’ve been lucky so far, no real horror stories; but there are some shit-holes out there; but we celebrate the shitiness!

You’ve played on tour for Green Day, Warped Tour, and your own headlining tours, how is each of these different or the same?
Green Day was just surreal; getting to play huge sports arenas, it’s a total fantasy world! Warped is always a fun communal vibe, they keep it real and the crowd’s always insane; personal hygiene is a real challenge though! Our own tours are the best ’cause we get to play as long as we want and bring out new bands we believe in.

Do you ever get tired of performing any songs?
Not really, because you’re feeding off the energy of the crowd and it’s either a new song or an old song that brings back fond memories of the old days. Hearing 1000 people scream along to a song we wrote 6 years ago in a tiny practice space in our hometown when nobody cared about us is always a thrill.

What’s your favorite song to perform and why/least favorite?
I’ve always loved playing the song Pretty Girl (the Way); it’s been in our set for almost 7 years and still feels fresh. I don’t like playing our really slow songs ’cause it’s hard to mellow out and get into it when you’ve got so much adrenaline going on, plus they scare me.

What are you doing after this tour?
Laundry and then getting ready for the next tour! We’re going back to Japan soon; we’ve been there 9 times already. I have a few side projects with new records too: The Lapdancers (record came out in Aug.) and Bad Astronaut (new record out in Nov.) so I’ll probably be busy promoting those as well.

How would you describe your music to someone who’s never heard it before?
Loud and sexy!!!

How is Lights Out the turning point for the band, as Pagnotta says?
I hope so, we want to always move forward and keep taking chances, while still staying true to our vision. This album is more sophisticated, the arrangements are less conventional, we kind of tore up the rule book and started fresh. It’s a new beginning, so forget what you think you know.

What are your hopes for the future with the band?
I want to play in all the countries we haven’t yet been to; I’d love to play in China, Brazil, Eastern Europe, Australia, etc. Basically keep making good music, becoming a better band, and chasing new adventures…Fuck it, while we’re at it why not sell a million records too!