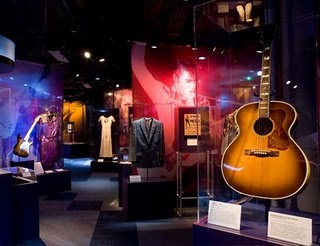 Last week I headed to SoHo to visit the recently opened Rock & Roll Hall of Fame in New York — definitely the best money I’ve spent in a while. From walking throughout three rooms of exhibits to watching a video of some of rock’s biggest icons live in concert, not to mention an autograph room where each musician’s signature lights up on the wall as their music is being played from speakers, there was something to offer every music fan.

As my friends can attest, I love quotes. So, the live footage of some of my favorite rock legends — Elvis, Jerry Lee Lewis, James Brown, The Beatles, Aretha Franklin and more — was great, but even better were some of the quotes intertwined with each performance. Here are a few that stuck out for me:

“A live concert to me is exciting because of all the electricity that is generated in the crowd and on stage.” Elvis Presley

“Music has to breathe and sweat. You have to play it live.” James Brown

“The words are just as important as the music.” Bob Dylan

“Music makes me high on stage, and that’s the truth. It’s like being almost addicted to music.” Jimi Hendrix 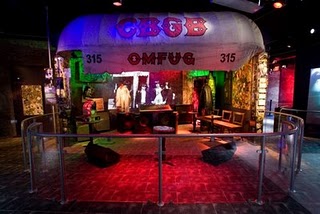 After the video, everyone was ushered into the first of three galleries where we were given a set of headphones and hand-held audio guide to walk us through each area. With personal memorabilia from every band imaginable — from concert posters, numerous acoustic and electric guitars and clothing from many well-known musicians to Johnny Cash’s boots, Elvis Presley’s personal Bible with handwritten notes in the margins (the page on display read, “The Lord is the strength of my life he shall lead me.”), and Bruce Springsteen’s 1957 Chevrolet Bel Air convertible (see below) there was so much to see! 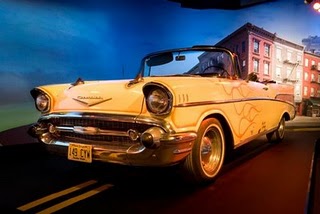 The Doors, the Who, Metallica, Prince, Simon and Garfunkel, Bob Dylan — you name it, there was something to see from each band and musician. In addition to two rooms of band memorabilia, a third gallery focused solely on The Clash — complete with live concert footage and exclusive interviews as well as posters, tour outfits and band equipment.

Another interesting portion was reading notes to fans written by The Beatles and The Rolling Stones before they hit it big. One of my favorite parts of the exhibit was seeing handwritten lyrics to infamous songs like Michael Jackson’s “Billie Jean,” Madonna’s “Express Yourself” and Billy Joel’s “Scenes From an Italian Restaurant.”

I highly recommend the Rock & Roll Hall of Fame for anyone visiting New York. They have a special holiday reduced price until January 2nd which I took advantage of, but if you miss that, it’s still well worth seeing for any music lover. I hope I didn’t give away too much of the exhibit, but provided a glimpse of what it has to offer. Be sure to visit and let me know what your favorite exhibit is! For more information, check out the Web site here.