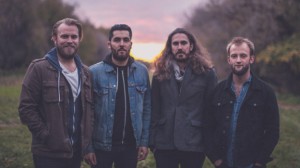 On a cold Friday night in January, silence came over a packed crowd at New York’s famed rock club Mercury Lounge. Not the norm for the often sweaty and loud venue, the Bros. Landreth were halfway into their soulful set when lead singer Joey Landreth began to sing “Let It Lie,” the poignant title track off their debut album released earlier that week (Jan. 27).

While the character in the song tells his lover that it’s time to move on, his voice tells a different story. Quiet, full of regret and endless questioning, Joey urges her to let things go while standing alone at the edge of the stage. Soon after, the band joined in. They lessened the quiet, but the crowd remained mesmerized.

Who are these people who can instill such quiet reverence among a normally rowdy audience at an NYC rock club? What is their secret?

The Bros. Landreth hail from Canada, made up of brothers Joey and Dave Landreth and longtime friends Ryan Voth and Ariel Posen. Taking influences from Americana, country, blues and rock, the Bros. Landreth feel like a combination of the Allman Brothers Band and the Eagles, with their blues-inspired guitar licks and memorable harmonies working alongside the pop sensibility and guitar virtuosity of a singer-songwriter like John Mayer.

“Those bands and artists are people who we have definitely spent a lot of time listening to and appreciating,” Joey Landreth says of the comparisons to the Allmans and the Eagles. “When someone picks out your influences like that, it’s pretty touching and very encouraging.”

As far as John Mayer’s influence, guitarist Ariel Posen said the singer changed his outlook on guitar music. “He opened my palette to a whole new style of music I wasn’t really listening to,” Posen confesses.

Bandmate Dave agrees, recalling his former band having played many Mayer covers. But what he most respects about the singer-songwriter is that he stuck to his guns and did his own thing musically.

Not unlike Mayer, the Bros. Landreth blend all these influences and passions on their debut album Let It Lie. While Joey admits it is a breakup album, he said it wasn’t intended as such.

“I think it’s served a purpose for some listeners to hopefully be catharsis for them as well. I think it has been,” Joey reflects. He adds, “We met a really drunk, brokenhearted dude one night, and he pulled me aside and was like, ‘Man, number 7.’ He was talking about the seventh song on the record. It was all he could muster.”

Dave Landreth explains that while the writing and recording process is an emotional catharsis for them, it is also a way to connect with music fans.

“When you hit those real poignant moments and connect with someone and their story, and you know that you’ve struck a chord, and for just a second that makes them feel better or pause to think, that’s really cool,” he says. “It’s a neat way to connect with complete strangers.”

For my complete interview with the Bros. Landreth, visit Radio.com.