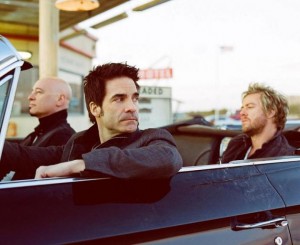 Last week, I interviewed Train frontman Pat Monahan. While we chatted a lot about songwriting and country music, he also touched upon the influence love has in his music. In fact, he admitted that most of the songs he writes are about love. “That’s all music is. That’s all movies are. That’s all anything is. When you look at all things in this world, everything is about love,” he told me.

One of my favorite tracks on their last album California 37 is a stripped down song called “Feels Good At First” which details the start of a relationship, when everything is going well. When I told him this, he confessed that it’s one of his songs that he really hopes to hear on the radio. Read a snippet of my interview below and for the rest visit Radio.com.

How did “Feels Good At First” come together?
I wrote that song with Allen Shamblin outside Nashville, Tennessee. Somehow Allen inspired that vibe in me. It’s a definite truth, that song. I sent it to my manager in New York and he was like, “How did you think of this? Actually, the better question is, how is this the first time anyone has thought of this?” He said, “It’s so simple. It’s so true. Love feels so good at first and then it starts to get funny and complex.” I don’t know why that song got written but it’s definitely a real place inside of me.

Is there any chance you’ll release “Feels Good At First” as a single?
That would be amazing. If you said to me, “Hey, is there a dream song?” That would be it. My manager is so a believer in that song that he had us do a video for it to put it out on YouTube and get wheels rolling. When we do that song in Europe I don’t even have to sing it, they sing every word. That’s my dream-come-true song if we can get that on the radio somehow.