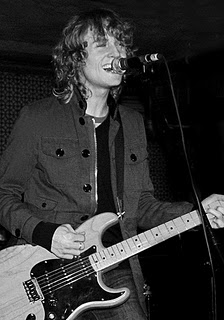 It’s hard to believe a few years ago drummer Dennis Manuel of Army of Me never picked up a drumstick and singer/songwriter Vince Scheuerman never wrote a lyric, “But it didn’t matter, because we were going to take over the world,” frontman Vince Scheuerman said. Army of Me started out playing in a friend’s basement, eventually recording a demo and touring up and down the East Coast before expanding their tour to the mid-West, getting signed on label Doghouse Records and releasing their first full-length album, Citizen, back in April.

Vince was nice enough to sit down with me last Thursday and answer all my questions about the band, the inspiration behind his writing and the stories behind some of his songs.

How could you afford to do all those tours? Did you guys have steady jobs?
It’s tough because anything that you love to do is hard to make money out of and there’s a lot of other people that are trying to do it too because it’s the cool thing to do. What you’re doing, what other artists are doing, musicians, photographers. It’s really hard.And it never pays you enough anyway. It’s underappreciated. We used to work jobs. I went to college for mechanical engineering so I worked a job at the National Institute of Standards and Technology inGaithersburg,Maryland, for a while. NIST set standards of measurements of length and time and weight. I was dealing with really small lengths, like atomic lengths. So we had microscopes that could see atoms. It was pretty insane. I’d sit in the basement, in the dungeon, working on these microscopes and then as soon as I was out of there I’d be playing music, practicing. I’m just always in the dungeon. What’s up with that? I didn’t see the daylight very much. I lived in a basement apartment. There’s a theme here.

Tell me a little bit about your writing process.
The weird thing about songwriting is it’s hard to describe how it happens. I’ve heard other people describe it and I can kind of relate to how they describe it as something that you don’t really have any control over, it just happens. And when it happens you’re like, ‘Holy shit, that was awesome, but how did I do that?’ you get a feeling like you didn’t do that. It’s hard to explain. Inspiration can strike at any moment. But then I have to make myself sit down and try to work on it, try to come up with something. When I finish a song or come up with a cool thing, the feeling is amazing. It’s a really powerful feeling, like ‘Oh my God I created that, that’s pretty cool.’ But at the same moment, I think how did I write that?

I really like the songs on our new record, Citizen. I’m really proud of what I was feeling and going through during the writing of that record and how I said it. I don’t know how it comes off to other people, but when I look at how I said what I was feeling I’m like, wow that was beautiful. With Citizen, I’m like how did I do that? Where did that come from? Could I duplicate it? Could I do it again? I don’t know. It’s almost like channeling something, like a grace given to you. I still don’t know how to write songs. People are like how do you write songs? I don’t know. But it happens.

Definitely feeling upset about something or wanting something, desiring something triggers a strong emotion. There’s definitely inspiration for a song. I think a lot of songs come from a place of desire, of yearning for something to satisfy you and you’re not feeling that thirst or hunger or quench. And you write about it. Whatever form it may be. It can be a relationship, anything. It is for me. I’m a pretty passionate person. I get hungry a lot, not necessarily for food. I think that’s the human condition, the feeling of looking for something and asking questions about what does it all mean. For me, songwriting is about looking for the meaning, asking for questions, searching for those desires, searching for that thing, whatever it is.

Do you ever want to hold back when writing a song?
I’m a pretty open person. When it comes to songs I don’t really think about that. It’s not that hard for me to be personal with songs, it’s hard for me to be personal with a friend, somebody I know. Maybe you’re more afraid of the judgment that a friend may have, to care what that person thinks. Songwriting for me is my way of searching – documenting my life and what’s going on inside of me.

I really like “Better Run.” When you listen to it, it just seems so honest. What inspired it, or what were you thinking about when you were writing it?
I’m always kind of hesitant to tell specific stories behind songs because I like to leave it up to people’s interpretation. When someone has an idea of what a song’s about to them, it usually has to relate to their life. When I tell them what it’s about they’re like, ‘Oh, that’s not what I thought.’ It takes away the message.

“Better Run” comes from . . . I was in a relationship for 6 years with someone. To be honest, she was really great – a beautiful person inside and outside. I never really experienced that much love from another human being, maybe my mom, but that’s about it. If there was one thing that I could bet on in this entire world, it would be that she would always love me. And I took her for granted. I was just always focused on myself and self-absorbed and I was kind of an asshole. She started to lose faith in our relationship and that woke me up to how it was and it devastated me. Not only did she not want to be in a relationship, I had been totally oblivious. I realized that I had hurt her and so. . . it fucked me up big time. It was rough. I was devastated.

So that song is kind of like, for the first time looking at someone with love, real love. The love is expressed as the desire for the best interest of the person I was singing to! If it’s not me, go find whatever that is. Even if it’s not what I wanted, it’s easy to be that person in a song. All you have to do is write the lyrics. It’s a whole other thing to actually really feel and mean that in real life, when everything inside you is screaming, “NOOO!!” It’s a very tortured song. There’s that tension there. I don’t really want this, you know? So the song hopefully captures part of that battle.

How would you explain your music to someone who has never heard it before?
The music is about the experiences you have in life and the feelings and the wants and the desires and the hopes and the dreams that I think we all have. It’s about asking questions and searching and trying to find myself and trying to find the answers. Maybe a couple of people have the answers, but everyone has the questions. I believe in hope and I believe that going through rough times, there is also growth and healing and that’s something I talk about in music too. So it’s kind of a mix of all that.

What’s your favorite song to perform?
I think “Perfect” may be my favorite. When we play “Perfect” live, it’s like a journey. Perfect might be my favorite song on the record, it’s a song about wanting to accomplish something great, wanting to prove that you’re worth something to somebody. And when we play it live, it feels powerful, and I feel like I can do something great. In the middle of the song, we do a section that is improvised. Brad, our guitarist, does a solo which is always great. I like to get lost in the moment.

I was wondering about the story behind “Rise.” I read that it was inspired by the tsunami in 2005, how so?
I heard this story about these children inSri Lanka, maybe 7 or 8 years old, who had lost everything in the tsunami. Their families – mothers, fathers, brothers and sisters swept away, their houses completely destroyed. They were literally left alone and abandoned.They were afraid of the water, which in a small fishing village, had been the source of life. Now it was a big monster who took everything. I can’t imagine the devastation, fear, and confusion they must have felt.

And as I related it to my life, it was the idea that maybe you were happy and content or complacent in that old house. And then something comes and just knocks you off your feet. That thing you were holding onto gets ripped right out of your hands. And although you could never, ever forget what had happened to you, that somehow, mysteriously, this was now an opportunity for growth, for a bigger, improved house – a mansion.

What’s the premise behind your album Citizen?
When we went to record this record we threw out all the notions of trying to appeal to one particular scene or group of people. Instead, we wanted to make a record that could communicate with everyone. We were living in a little secluded beach house on the coast inVirginia for about two months, where we got to escape the world that we were used to, and just concentrate on making the record.

When it came to the lyrics, I took a new approach to these songs, something I’d never done before. I wrote about how I felt. That sounds kind of obvious, like, what else do you write about?! But in the past, I had attempted to be clever or ironic, witty, etc. in my songs. Not that there’s anything wrong with clever lyrics, but this time around, it was almost like I didn’t have the energy or the desire to do that. This time, my world was turned upside down and I couldn’t do anything but write out exactly what I was feeling, no irony. I was making myself naked. And I was scared! I worried that people might think that the lyrics were dumb or too obvious, but it was all I could do at the time. I remember telling another musician friend of mine that I couldn’t be ironic or sarcastic about subject matter that I cared so much about. And he assured me that it would be ok.

And in hindsight, I believe it was ok. Because I think in music and in art, when you speak from the heart, it’s more powerful than when you speak only from the mind. You can’t escape a purely gut reaction to something. It’s real. In artistic expression, for every cynical person that thinks something is silly or stupid, that same expression might change another person’s life. Citizen is a record about being a human being. It talks about the struggles, the pain, the questions, the searching. But it also talks about the other side of that struggle, where I believe there can be healing and hope, strength – like in the song “Rise.”