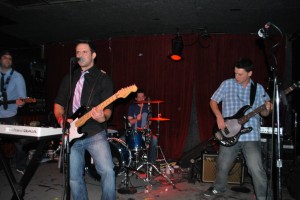 Maxwell’s was packed to capacity Saturday night as fans anxiously waited for Fifteen Fleeting to take the stage. With many in attendance sporting 15 F t-shirts and glow stick sunglasses, the room lit up in a distinct green and yellow blaze.

“If you have glasses, put them on. It enhances your vision – Fifteen Fleeting vision,” said frontman Vinny Belcastro. 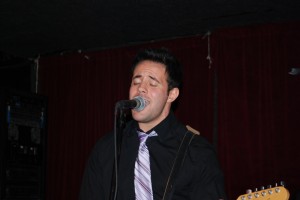 With a driving drum beat and soaring guitar and vocals, the band had the entire room clapping along to set opener “Streetlamp Limelight.” As the song ended, Belcastro waved his arms in the air, asking for more applause.

“Hoboken, let me know you’re alive out there,” he screamed. The animated frontman continued to grab concertgoers’ attention with his high energy and strong stage presence throughout their nearly 90-minute set.

“We basically gave birth to a child,” Belcastro continued. “This child is called Presents and we want you to all go home with a copy and play it in your car and for your friends,” he said of the band’s first full-length release.