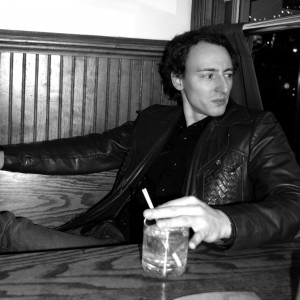 Songwriting Session is a column that goes behind-the-scenes with artists and songwriters. Each Sunday, a new songwriter will share their journey and provide lessons they’ve learned along the way. This week, Mike Vial shares what he has learned as a songwriter.

Mike Vial has had a whirlwind six months. Days after the release of his new album, A World That’s Bigger, the Michigan-based singer/songwriter was hit by a car as he was walking to play a show. Vial soon found himself hobbling on crutches and lucky to be alive. He admits that, thankfully, his guitar has more cracks than him. Now fully healed, Vial chatted with me over the phone about his new album, his journey to becoming a full-time musician and some of the stories behind the songs on the record, which details the birth of his first daughter and the loss of a family member.

Vial has been a songwriter for as long as he can remember. The 35-year-old began writing poems and playing guitar in high school. He’d continue crafting songs as an adult in between his day job as a high school English teacher where he taught for eight years. In 2011, he decided to quit that job to focus more time on his artist career. Six years later, Vial continues full speed ahead with his songwriting and looks back on how it all began.

“I do remember the first song I wrote, and it was when I was a freshman,” he recalls. “I wrote a bunch of crappy songs that were more like the terrible poetry you would read in high school. I had a whole binder and I threw it away. I wish I still had it. The first song that I ever kept was when I was leaving for college. One classic breakup song. It was the first time I was singing.”

Vial admits that he had always pictured himself as a guitar player and not the frontman. During his senior year of high school, he and his friends were showcased as part of their school’s talent show where they performed three songs. Since no one could sing harmony in the band, Vial sang and he remembers it going pretty well.

While college mostly involved him reading books and teaching classes, he made some time for playing guitar and writing songs. He says that there were many little victories along the way that kept reminding him once he graduated that music wasn’t just a far off dream.

Years into his professional career, Vial often found himself playing bar gigs throughout Michigan after a long day of teaching. It was the steady money that eventually convinced him to finally leave his teaching job after eight years.

“I’m learning that there is no clear transition. It wasn’t like I had the perfect sign that it was right to quit my job. I just had to take the leap,” he explains. “It was the little victories along the way, and just in knowing I had to give it a shot. I think one thing is, and now that I’m a dad I definitely can relate to this whole thought I had. I needed to give myself time to figure out what music was going to look like before we started a family.”

As he approached his eighth year of teaching he realized it was “now or never,” explaining that the more comfortable one is in his lifestyle, the harder it is to leave. He describes music as a calling and says that when crafting a song, the music often comes first for him before the lyrics.

“There’s a moment in songwriting for me, where I feel like there’s enough development and there’s enough to go on, where the song is going to get finished, and it’s going to be pretty good,” he shares. “I know when I have the feeling, and I can’t explain what exactly it is. There’s enough structure there, there’s enough interesting parts. For the first set of lyrics, they usually come in the process when I’ve got a set structure of music and then I start humming and finding melodies. Then I find some lines, and the lines usually lead me to an idea. Then I’m off to the races.”

Vial adds that songwriting for him is “very chaotic.” He says the chaotic and messy process is the fun part for him.

“A World That’s Bigger” is the first song that Vial wrote as a father and is the title track to his latest release. He said it started with a Neil Young-esque riff that he jammed to before stumbling upon some melodies. He recalls humming as his daughter, Ginny, was sleeping in her bouncer.

“I was playing as quietly as possible. She’s just a baby, she can sleep through anything. I was lucky to catch that idea of the first verse, which is the first thing that I wrote lyrically for it during the processes of finding the chords that I was liking,” he recalls. “I was thinking about Ginny and I walking to this historic one-room schoolhouse down the street from our house and the baseball field and the church there. Then the theme of the weight of responsibility as a parent took over. Once I had the first verse and the chorus done, I knew that that was going to be a song.”

“Burning Bright,” meanwhile, was inspired by his late relative, David Plawecki, who started a pay-it-forward movement where he would give away $100 to everybody he knew for them to then give that money away to somebody else. Vial says he tries to write songs that are universal and this song embodies a universal theme of loss and death.

“I’ve learned I have to write about what I know,” he shares. “The way in which I approach is totally up to me because I’m writing the song and I’m not writing a memoir. That is another key balancing act of what’s going to do the song justice versus what’s going to do my ego justice. I have to be writing about what I know to get to the part where I don’t get stuck in a loop and I have enough to go on and I have enough interest to explore it.”

Vial admits that he’s been wanting to write a murder ballad but if he’s writing one, he needs to know that he’s relating to the speaker in the song.

“If they’re angry, I have to feel that anger. Fortunately, I’ve never hurt anybody but I’ve got to relate to that anger to get that song done,” he explains. “When it’s a relationship song, I’ve got to relate to them on a very personal level to get the seed of the song. It might grow in a different direction, but my seeds have to be really personal to get to the end. Otherwise, I just don’t feel like I have enough to go on.”

One song that has struck a chord with listeners is Vial’s “Girl On the Mountain, Boy On the Beach.” It’s a song for refugees that was entered into the Grassy Hill Songwriting Competition. While it didn’t win the prize, it did allow Vial to travel to Connecticut and play the song for the folk community there. He says it was a victory for him as a songwriter as so many people came up to him following his performance explaining how moved they were by it.

“It was the kind of song that gave myself permission to go in the folk direction,” he concedes. “Anytime we get to go to another city and play for a small or large audience is a win for the artist. That’s a part of the challenge. It’s a dream to just keep writing, let alone trying to play to people.”

For more on Mike Vial, visit his website or stream his latest album below.