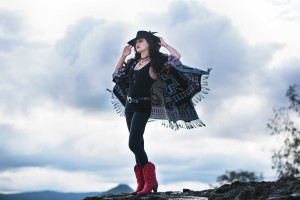 Lindi Ortega is gearing up to release her fifth studio album, Liberty, on March 30 and in a new article featured on Lenny Letter, the singer opens up about her lifelong struggle with body-dysmorphic disorder.

Ortega is extremely honest about her often debilitating condition. She cites an experience being bullied as a teen for making her go into a spiral of self-consciousness and obsession with her appearance.

“When I was thirteen, I showed up to a party where I happened to be wearing the same top as one of the ‘pretty girls’ in my class,” she writes. “Noting this, a boy lined us up side by side and decided it would be fun to compare us. His cruel assessment of me, in front of my peers, was devastating. Up until that point, I hadn’t really had any comparison for my looks; I thought I was normal. It wasn’t until people told me I was ugly that I started to believe that I truly was.”

For years, Ortega says she struggled with her appearance. “My self-image grew so distorted that I actually convinced myself I was deformed,” she continues. Thanks to extensive therapy and support from her mother, Ortega has learned to cope with BDD.

“People often ask me where my dark, lonely songs come from. This is that place,” she concedes. Read her heartfelt post here.

Ortega proves to be a positive role model as she speaks out about the struggle one goes through with BDD and works hard to overcome her ongoing battle with BDD. Listen to her new single, fittingly titled “The Comeback Kid,” below. 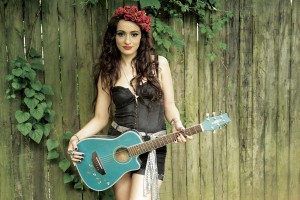 Lindi Ortega took the stage of New York’s Mercury Lounge to screams Tuesday (Aug. 4) night. And for good reason. Just days before the singer-songwriter released her fourth studio album Faded Gloryville, Ortega proved why she is one artist to keep on the radar with mesmerizing vocals, killer stage presence and talent that begs to be heard.

Ortega began her set with the haunting “Murder of Crows” where her smokey vocals had her joking after the song. “So moody. I feel like we’re in the Red Light District tonight,” she said as a red spotlight engulfed her and her band.

Dressed in her signature red cowboy boots, gold sequin skirt and a black crop top she said she dressed up for the occasion. “I’ll have you know, I didn’t want to show up in my regular duds,” she said with a laugh. “I needed to be sparkly! I went to a vintage shop and B-lined for the sparkly section.”

Throughout her hour set, Ortega performed old fan favorites like the poignant “Dying of Another Broken Heart” off her 2008 EP The Drifter. On the stripped down track, Ortega captivated the sometimes rowdy crowd with her ethereal voice and memorable lyrics like “I don’t believe in fairy tales, I don’t believe in fate/ I don’t believe I’ll ever find my very own soul mate/ So take me to the hospital before it gets too late/ I’m dying of another broken heart.”

In addition to performing a few new tracks off Faded Gloryville like heartbreaking country ballad “Ashes” and the title track which she said is a song about the reality of doubting yourself and the dreams one decides to chase, she played some covers that had the crowd singing along word for word. Those covers included memorable guitar riffs on Janis Joplin’s “Mercedes Benz,” spot-on vocals on the Bee Gee’s “To Love Somebody” and her own fiery rendition of Johnny Cash’s “Ring of Fire.” The audience was entranced on each one and it was the kind of crowd that wasn’t lost on the singer.

“We’ve got a good crowd here tonight,” she remarked, pointing out fans in Dolly Parton, Sturgill Simpson and Social Distortion t-shirts. It was Ortega, though, who was the belle of the ball. When one fan screamed “you’re beautiful!” she shrugged off the compliment and asserted, “everyone’s beautiful with sparkles.” Sparkles or not, Ortega stole the show.