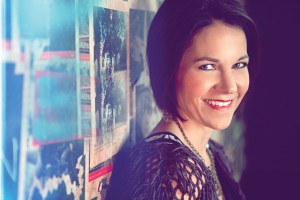 Texas born and bred singer-songwriter Leyla Fences is tired of today’s country music so she decided to do something about it. Since the songs she heard on the radio didn’t relate, she wrote some that would.

“I found myself listening to today’s mainstream country and feeling two things,” Leyla said. “One, that it didn’t sound like country music anymore and two, that even though songs today might still portray everyday life, it’s mostly only the happy, picture-perfect parts. I sure wasn’t hearing songs that I could relate to based on what I was living at the time so I decided to write about those experiences – even though they didn’t all have fairytale endings.”

All 14 of the tracks on her sophomore release Itty Bitty Twang Twang were written or co-written by Fences and portray the heartache and pain felt after a breakup, being cheated on and trying to move on. Embodying traditional country music, Fences blends her sassy style with a comedic touch.

Itty Bitty Twang Twang kicks off things right away on the tongue in cheek “Get the Truck Outta Here.” The song tells the tale of an ex trying to come back into one’s life despite having a new wife. With a distinct country twang that recalls Loretta Lynn, Fences is well on her way.

“You took me for a ride/Drove me half out my mind/Now you’re cruising back this way/Honey, I ain’t got the time,” Fences sings with catchy fiddle and steel guitar accompaniment.

“Pretty Lies” brings to mind another singer with a distinctive approach: Gretchen Wilson. Telling the heart-wrenching tale of catching her love red-handed with another, Fences won’t stand for it. Alongside a steady percussion beat, wavering steel guitar and compelling piano and fiddle features, Fences’ laments and moves on.

“What I Do” continues to mourn the end of a relationship with slowed instrumentals and Fences’ emotional singing style while “Too Far Gone” livens things up with fast-paced electric guitar and soulful background vocals. On “The Next Time” Fences gets out of her own situation and offers advice to a friend who has lost the passion in her love life. She should heed her own advice in her next track, the rollicking “How Things Have Changed.”

Eight tracks in and it’s evident Fences has quite the amount of heartache to get over. “Just a few more tears in my beer and I’m gonna be all right,” she sings on the twangy “One More Honky Tonk.” Meanwhile, “I Wonder” follows suit and is a relatable song in which Fences can’t help but think of what went wrong in a past relationship and whether her ex ever wonders about her.

While the soulful, piano driven “Pain Relief” quickens the pace alongside Fences’ sultry singing, “The Cards” slows things right back down. As “Trophy Wife” and “We’ll Just Figure It Out” close the album Fences’ talent continues to shine. Not shy to reveal her true emotions while exemplifying true country music icons like Loretta Lynn and Gretchen Wilson, Leyla Fences is one country artist to watch.