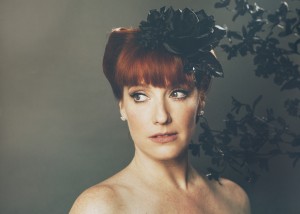 Songwriting Session is a new weekly column that goes behind-the-scenes with artists and songwriters. Each Sunday, a new songwriter will share their journey and provide lessons they’ve learned along the way. This week, Leigh Nash shares what she has learned as a songwriter.

After spending over a decade with Sixpence None the Richer and years honing her sound as a solo artist, Leigh Nash released her debut country album The State I’m In last month. On the 12-track release, Leigh co-wrote each song and says writing was a pretty big leap as it was often difficult for her.

“I love to write but the issue for me is having the confidence in yourself,” she admits, speaking softly as we sit at Nashville’s Headquarters Coffee on album release day.

Throughout the writing process, Leigh would often question if she was capable of writing material that people would want to hear. Having grown up listening to Conway Twitty, Charley Pride, Johnny Cash and Jim Reeves, she wanted to keep their melodies and style of music alive within her album.

“The way they wrote songs, I really love it and that was my school as far as songwriting goes, by listening to those old classic songs,” she adds.

So how did she get over her lack of confidence with songwriting?

“Just by doing it,” she explains. “I’ll get my guitar out and come up with something I feel like is a strong story and a good solid melody and I want to finish it.”

Leigh looked to friend and songwriter Jesse Hall to help her craft some of the songs on her new album. He’s someone she says is like a brother to her. When she played him her ideas and he wasn’t bored and didn’t shy away from the project, she knew she had a partner in the project.

“He helped me make it exactly what I dreamed of in my head. Him loving it gave me confidence,” she adds. “As you go and more people hear it, it drew more out of me. It fed off of itself. Now I have immense confidence in my writing abilities. It took exercising the muscles enough.”

Some of the more vulnerable moments on the album come in the form of songs Leigh wrote with her husband, musician Steven Wilson, including “Tell Me Now Tennessee” and “High Is Better.” She stresses that vulnerability is the key to everything in life, especially in songwriting.

“If you can be vulnerable, I think a lot of good things will come to you,” she adds. “That’s when we’re the softest and our ears are the most open.”

While Leigh admits to having had some arguments with her husband during the writing process, ultimately the songs that made the album were written together from true life, relationship struggles and things she had said to her mom on the phone.

“We both have to be in the right mood,” she says of writing with her husband. “I think it’s hard to write with your spouse because they’re the ones that get your worst. I would never say to a friend, ‘I don’t like that chord.’ I get real cutting. If we’re in a good space we work off that. I love writing with him. Subject-wise, we do a good job. It helps when we’re writing something we’re both excited about.”

Leigh Nash’s album The State I’m In is out now. Read more of my interview with her on Taste of Country.