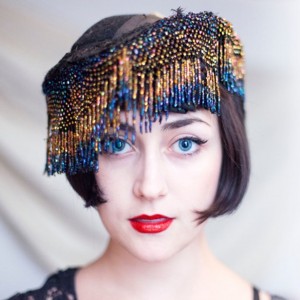 On Friday, (Jan. 16) Hailey Tuck made her New York debut to a packed crowd at Joe’s Pub. Taking the stage shortly after midnight, in a vintage dress and with a mesmerizing voice, it was evident from the very first song that Tuck would leave the crowd wanting more jazz in their lives.

She kicked the night off with a jazzy cover of Bob Dylan’s “Don’t Think Twice, It’s All Right.” Standing in front of a piano, drum kit and upright bass, it was as if Tuck transported the audience to the roaring 1920s with her voice and jazz-styled songs.

Whether it was the classics or her own take on Maroon 5’s “Sunday Morning,” she impressed. Prefacing “Sunday Morning,” Tuck dedicated the song to the guitarist of Maroon 5 who dated her sister. “I was in love with him. I hope if he hears it he’ll realize he dated the wrong sister,” she said of her childhood crush on James Valentine at the song’s close.

Other highlights included a cover of The Zombies “Tell Her No” as well as Tuck’s own originals like “So In Love.” While she admitted that she planned to get by as a jazz singer by just performing the classics, she said multiple people urged her to write her own music and she soon thought otherwise.

Tuck got her start as a singer at 18 when she bought a one-way ticket to Paris with the dream to become a jazz performer. The Texas native is now readying a new EP, which is due out later this year.