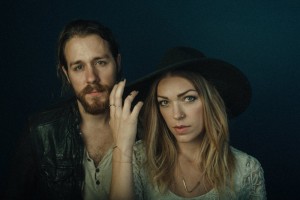 Elenowen throw logic out the window on their sophomore album, For the Taking, released earlier this year. The husband and wife duo, made up of singer/songwriters Josh and Nicole Johnson, gained exposure on the first season of NBC’s The Voice and have continued to develop that recognition with their music being featured on TV shows like Nashville, Pretty Little Liars and Army Wives.

That’s not to say there weren’t struggles along the way. Josh and Nicole recall early hurdles as they were getting national attention on The Voice. During that time, they were still living in Nicole’s parent’s basement, something they say inspired much of the autobiographical record.

“After the exposure from The Voice, touring and getting more buzz around us than we ever had, that aspect of our career was great but at the same time we were still living in her parent’s basement and we had lived there for five-and-a-half years,” Josh recalls while sitting in the basement of his publicist’s office on Music Row beside Nicole and their son Nolan. “We were at the stage of our marriage where we were married almost six years at the time and Nicole’s biggest piece of her identity was to be a mom and she was missing it.” 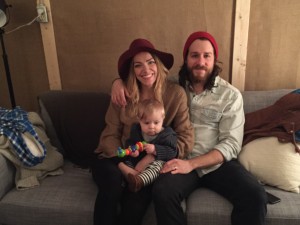 Nicole and Josh Johnson with their son, Nolan, in Nashville

He adds that For the Taking captures the struggle of the couple trying to figure out how to keep their career momentum going but also the desire of starting a family. Much of the album was written in that basement apartment as they looked out the basement window dreaming of getting out.

“I would say there’s a decent amount of desperation and hope in the record. We landed on the title For the Taking near the end of that season where we did actually get pregnant and we did find ourselves a house,” he says with a smile. “It was a massive step of faith of, ‘This is where we feel we need to be going so let’s start and take it in our own hands.'”

Nicole chimes in, explaining that previously they had spent so much time waiting to make decisions on what felt logical instead of what made them happy.

“We finally tossed that [logic] to the wind and started making decisions based on what we wanted out of life,” she says. “It still makes things extremely difficult because logic is there for a reason. Logic makes things sometimes easier.”

But, as heard on For the Taking, logic isn’t always the best route. Josh and Nicole agree that “One By One,” a song of theirs featured on Nashville, is one of the most honest songs on the album. With Nicole singing, “Don’t walk away/Don’t walk away from me baby/Even though I’m going to treat you so badly sometimes,” Josh says they don’t sugarcoat the struggles they’re going through. Other songs, like “Desert Days,” bring about comparisons to Fleetwood Mac, a welcomed compliment for the duo.

“If we remind people of Fleetwood Mac when they listen to us, alright! I don’t know what more I want as far as people to get out of it,” Josh says, beaming. “For me, doing music, that was the only thing I was really passionate about when I first started. It was the first thing I grabbed onto. When we started doing it as a duo it had a little more momentum than anything I had done alone. It got me really excited about it. This was the best thing we’ve got going for us, let’s chase after it. It was the most viable option to keep pursuing. I was steering the ship.”

While Nicole admits some days were tougher than others, helping fulfill Josh’s dream was something she never hesitated to do until it started to threaten her own dream.

“Even in the hardest days that I wanted to quit, there was always that thing in the back of my mind where I didn’t want to wonder my whole life, ‘What if?’ That’s what kept me going,” she says. “Doing music is Josh’s biggest dream and I wanted to help him in that. Because we’re a duo it’s not like I can just be like, ‘All right, I’m going to check out and do it on your own.’ In a way I was stuck in it, but not in a resentful way.”

She adds: “When it was a matter of me not being able to have kids because of it, that’s when I was starting to be like, ‘OK, I’m giving up all of my dreams for this thing that I don’t even know what’s happening.’ But now that we’re trying to figure out how to do both it’s more challenging but it’s also more rewarding at the same time. Just seeing it through, taking it a day at a time. That’s all you can do.”

Now they’re out of the basement and continue their musical journey by touring to support their latest release For the Taking and raising their one-year-old son.

“We’re in a little house that’s not much but it feels like the Taj Mahal compared to the basement,” Josh laughs. “We got this little guy chewing on everything, crawling on everything.”

“It changes everything,” Nicole concludes.

And for Elenowen, change is a very good thing.

Elenowen’s album For the Taking is available now.