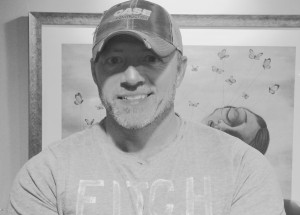 Songwriting Session is a column that goes behind-the-scenes with artists and songwriters. Each Sunday, a new songwriter will share their journey and provide lessons they’ve learned along the way. This week, Dan Couch shares what he has learned as a songwriter.

Dan Couch moved to Nashville in 1995 with the dream of being the next Garth Brooks. When things didn’t happen exactly how he envisioned, he found a new passion: songwriting.

The Indiana native spent years attending writers rounds and open mic nights in the late ’90s, meeting hopeful artists like himself including Kenny Alphin of Big & Rich, Ira Dean of Trick Pony and James Otto. Meanwhile, he continued to hone his craft as a songwriter. After being in Music City for three years, he soon realized that what he loved most was not being on the stage but writing songs.

“I was in love with the idea of being a star, but I’m thankful that I was because it got me here and I found songwriting,” Couch says over the phone. “I started doing more songwriting and really became passionate and fell in love with songwriting. Then I was determined to get a writing deal and become a songwriter and let that dream go about being the next Garth Brooks.”

In 1999, nearly four years to the day of moving to town, Couch signed his first publishing deal with BMG and continued attending writers rounds and setting up co-writes. Chart success would not come to Couch for a while. In fact, it was 13 years later in 2012 when he would see his first No. 1 with Kip Moore’s “Somethin’ ‘Bout a Truck.” The two-week No. 1 is what he calls “a dream being realized.”

It was a long journey to his first No. 1 hit and Couch pauses when asked what kept him going all those years. He says it was blind faith and support from his parents, friends and especially his wife, who is a labor and delivery nurse.

“We all had the mindset that if you wanted it bad enough, if you worked your butt off, that you can get there. I never doubted that I was going to be able to do it,” he shares. “Obviously, it took a lot longer than I thought it was going to, but that ended up being our journey. We’re on this journey and I wouldn’t change any of it.”

Couch adds that being hard-headed and holding the belief that success can happen is what often kept him going. Following his first No. 1 with “Somethin’ ‘Bout a Truck,” he’s had several hit songs including Moore’s second No. 1 “Hey Pretty Girl” as well as “Young Love” which went to No. 22 on the country charts and Canaan Smith’s “Hole In a Bottle” which went to No. 23 this past summer.

He credits his wife, who he calls the breadwinner, for allowing him to have a normal life and the livelihood to pursue songwriting full-time. “I couldn’t have done it without her,” he says. Couch’s wife is also his muse and was the inspiration behind his second chart topper, “Hey Pretty Girl,” off Moore’s debut album Up All Night.

“I remember wanting to write a song in honor of my wife, in appreciation. To tell a real story,” Couch recalls of the day he wrote the song with Moore. “I remember mostly throwing out a line that said, ‘Hey pretty girl, you did so good. Our baby’s got your eyes, and she got your nose like I hoped she would. Hey pretty girl, you did so good.’ Kip said, ‘No, man, and a fighter’s heart like I knew she would.’ That just absolutely floored me when that line came out of Kip’s mouth. I do very much remember that moment.”

For more of my interview with Dan Couch, visit Sounds Like Nashville.