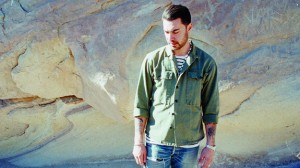 Just around this time two years ago I was coming back from Canada’s Emerging Music Festival which I covered for Billboard. The festival was in a small town in the middle of nowhere about three hours north of Montreal and as the title explains, featured numerous emerging talent. While most of the artists spoke French and addressed the crowd in French I was grateful to stumble upon Hanni El Khatib’s set. A fellow American, at one point he joked that he doesn’t know any words in the language so he wasn’t even going to try. What a relief! I spent much of the festival wondering what exactly each artist was saying on stage as they introduced the next song.

One of the tracks I loved from El Khatib’s performance was “You Rascal You.” The gritty guitar and his raspy vocals really struck a chord and I’ve been following his music ever since. Listen below.

We recently started a new feature at CBS called New Music to Know and I pitched him as one of the artists to cover. Having just recently released his sophomore album, which was produced by the Black Keys’ Dan Auerbach, Hanni El Khatib filled me in on the recording process and how his job as an Art Director influences his music.

“Often times I’m thinking of the cover of the record before I’m even writing songs for the album,” he explained. “Just because I need to put it in some sort of visual context which is why I think music videos are so important. It helps further explain your overall concept for the music. I think of the song as a percentage of the overall vision of what I’m trying to do.”

Watch the interview below and for my complete writeup, visit Radio.com.