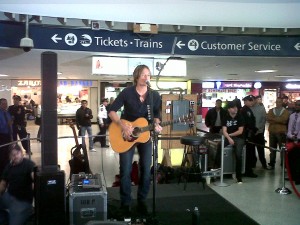 “I’m playing at Penn Station … I can check this off my bucket list now!” Keith Urban yelled to a sea of surprised rush-hour commuters at the bustling New York City train station Tuesday morning.

The Aussie country superstar performed an impromptu concert at Penn Station, in celebration of the release of his brand-new album, ‘Get Closer.’ Joking that he wanted to make a set-list full of train songs, “like take the last train to Trenton,” he joked, Keith instead kicked things off with an old favorite, ‘Days Go By.’ (He did, however, change the line “better start livin’ right now” to “better start catching your train.”) That was followed by the first single from the new CD, ‘Put You in a Song,’ followed by the heartwarming ballad ‘Only You Can Love Me This Way’ and then another uptempo fan-favorite, ‘Somebody Like You.’