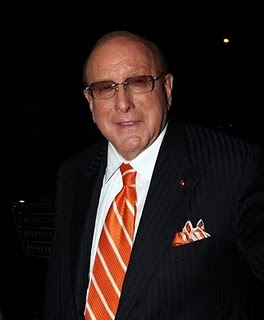 It is indisputable that Clive Davis is one of the most highly regarded music executives in the business. The man behind chart-topping artists including Alicia Keys, Kelly Clarkson, Leona Lewis and Whitney Houston, not to mention rock legends Carlos Santana, Aerosmith, Janis Joplin, and Bruce Springsteen, Davis proves his passion for music with every artist he takes under his wing.

Davis spoke to a packed room at New York University last night. The talk, sponsored by SoundCtrl, was moderated by Billboard‘s Editorial Director, Bill Werde. Entering the room to a standing ovation, Davis thanked the audience for attending despite the World Series game, which he said he TiVoed.

Known as a versatile producer, Davis said when he started Arista he didn’t specialize and instead would frequent Broadway shows on a nightly basis and Carnegie Hall twice a week scoping for new talent and music trends. “To pour yourself into it, you learn and try to permeate yourself. You learn not to specialize.”

Before attending the Monterey Pop Festival, Davis didn’t know he had an ear for music. The festival was an epiphany, he said. “Monterey was a different culture than I had ever seen before. A different attitude, different music. I just knew from every fiber of myself that this was a cultural movement, a revolution and I was very fortunate [to be there].” Davis quietly bought Janis Joplin’s contract as well as Earth, Wind and Fire shortly after. “I felt this would be the new sound for music to be heard around the world.”

Highly regarded in the music industry as not trying to fit in and look like the artists he represents, Davis said, “Over the years you learn you have to be yourself. Once you try to purposely be trendy you lose respect.” He continued, “I’ve also found that artists want a manager who’s an expert. Artists want to be protected. They don’t want you to be one of them. I don’t try to talk in the jargon of Hip-Hop. It’s always best to be yourself.”

A firm believer in listening to his gut, the music industry veteran knows what a hit song is. In fact, he told the audience that Kelly Clarkson didn’t like many of her hits originally. “It’s not easy to come up with a hit. I work very hard at not going over the hill and making sure my ears stay current. You’ve got to be on top of your game.”

Before opening the floor to questions, Davis demonstrated his listening process to the audience with three early demos of Carlos Santana’s hit, “The Game of Love.” The first demo highlighted the instrumentals of the song with a male vocalist. It didn’t sound right, so Davis suggested adding a female singer — Macy Gray. Powerful, but not what he was looking for, Davis eventually chose Michelle Branch as lead vocals. However, there is an interesting back story to the song. The original choice was Tina Turner, who refused to do a music video for the song. Davis insisted that a video was necessary for mass appeal, but Turner declined, leading to the hit as we know it today featuring Branch.

While the future of today’s music industry is unclear, Davis remains optimistic. “I do believe that there will be new labels and companies formed today. There still is that hunger for music. There still is that role music plays in people’s lives. Music is as important, if not more today, than it has ever been.”