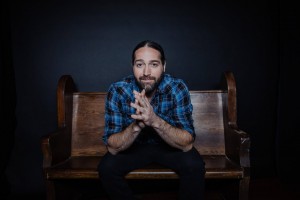 Josh Thompson penned his first song at the age of 21, just six months after he got his first guitar, and he hasn’t been able to stop since. The 40-year-old tells Sounds Like Nashville over the phone that he’s always writing something.

“I’ve always been a huge fan of songs and some of my favorite writers, people like Merle Haggard and George Jones, were extremely vulnerable,” Thompson explains. “They could allow themselves to be almost the bad guy and that gave them a redeeming quality. When I started to write songs and was playing them and noticed in small increments that there were some people that were getting moved by some of the things I was writing, I was gearing up more and more at that point to be like, ‘Okay, I’m just going to go to Nashville and see what it looks like and try to make a living writing songs.’”

The Wisconsin native visited Nashville for the first time when he was 24. He loved everything about the city and after spending some time downtown on Broadway he admits that he thought Music City was a never ending party. Naturally, he moved there the next year. Seven months after he relocated Thompson had a publishing deal and when looking back on his early career, he realizes things happened rather quickly. He later proved the old adage of Nashville being a 10 year town true as it took him 12 long years to see his first No. 1 hit with Jason Aldean’s “Any Ol’ Bar Stool.”

Becoming a full-time songwriter wasn’t easy though. Thompson had a day job as a concrete finisher, which allowed him to pay his bills and make enough money to get by so he could spend his free time writing songs. He soon garnered a record deal with Columbia Nashville after being recognized for a song he wrote in 2008 that Jason Michael Carroll cut called “Growing Up Is Getting Old.” The song became the title track to Carroll’s sophomore album, released in 2009.

The following year he’d release his debut album, Way Out Here. He co-wrote each of the project’s 10 tracks, including Top 20 singles “Beer On the Table” and “Way Out Here.” The latter hit No. 15 on the country charts and was Thompson’s biggest hit as a solo artist.

Thompson co-wrote “Way Out Here” with David Lee Murphy and Casey Beathard. While he doesn’t recall how the song came to be as he penned it nearly a decade ago, he says he remembers the feeling he had once the song was finished.

For more of my interview with Josh Thompson and the hits he’s written including Jason Aldean’s “Drowns the Whiskey” and “Any Ol’ Bar Stool,” and Blake Shelton’s “I’ll Name the Dogs,” visit Sounds Like Nashville.