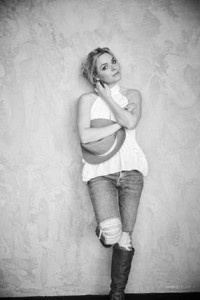 Being a freelance music journalist, I receive numerous pitches on new artists each day. While I try my best to listen to each act’s music, it’s sometimes easier said than done. Today I was pleasantly surprised when I clicked on a link to Hayley McKay’s music video for her latest single, “Chance to Change.” The UK artist’s striking vocals and honest lyrics instantly drew me in and I couldn’t help but become entranced in the storyline within the video and the song itself.

“Chance to Change” has a women realizing that the end is near with her boyfriend. As the video plays out, it seems McKay is being ignored by her beau. While she gives him another chance at the bar, the scene becomes increasingly uncomfortable as he chooses to sit in silence on his phone instead of pay attention to her.

“I think you know you’ve gone too far / And now we’re here, here alone in silence / Cursed with the feeling that we’re through / Nowhere to run / So maybe all that I ever gave you was a chance to change,” she sings.

Penned by Irish writers Aoibheann Carey Philpott and Joe Carey Jnr, “Chance to Change” showcases haunting vocals from McKay. The song is one of 10 tracks that will be featured on her self-titled debut album, due out in April.

“Every song shows off a different element of my voice and my producer, Matt Parisi, has really delivered an amazing sound with Geoff Pesche at Abbey Road adding his own special magic,” McKay says in a press release. “I’m so proud of this album and I really hope everyone will love it as much as I do”.