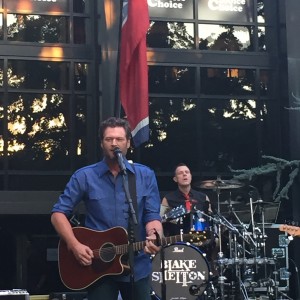 Blake Shelton has come a long way since 1994. In the ’90s, the then-mullet-wearing singer would drive past Music Row in hopes that one day he’d have a record deal. Wednesday, (Sept. 23) thousands of fans flocked to that very same spot to catch a free concert by the singer—a fact that was not lost on him.

“I have been coming back and forth to this town since 1994,” he told the crowd on a stage set up outside of Warner Music Nashville’s offices for the label’s final Pickin’ on the Patio performance of the season. “Never in my wildest dreams did I think I’d see this street blocked off and watch this many people sing along to my songs.”

For nearly an hour, Blake and his band performed for the crowd. While the show didn’t start until after 6 p.m., fans had been lining up for hours, some fainting in the hot Nashville sun as they waited for the singer to take the stage.

“Well, holy hell. I am shocked and honored that this many people came out to see me today,” he said two songs into his set. “Look at all these people. There are country music freaks out here!”

Before he began to perform “Mine Would Be You,” he informed the crowd that many of the songwriters behind his hits were in the audience. He added, “Welcome to Nashville. This is country music.”