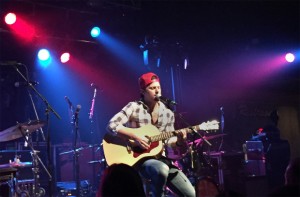 I was incredibly lucky to interview Kip Moore twice this year, first at the ACM Awards in Las Vegas back in April and again last month at Starland Ballroom in New Jersey. To fully understand my excitement (and nerves) to sit down with Kip for a lengthy interview, I have to tell you that his debut album Up All Night is by far my most listened to country album ever. He released it back in 2012 and for the past two years it has been the soundtrack of my life. Whether at home, at work or traveling around the country, it’s one of those timeless albums that I put on no matter the mood I’m in and it always makes me feel better. So to interview him twice this year truly was a dream come true.

What struck me most about our interview was how serious Kip was. While answering some of my questions he at times seemed intense, especially when talking about songwriting and his last single “Dirt Road.” A complete departure from his fun and flirty stage persona, it was interesting to witness the two sides of the singer-songwriter in one night. Below is an excerpt from our chat.

It’s no secret Kip looks up to The Boss. He even covered his song “Atlantic City” twice that day at the Starland Ballroom, once during soundcheck and again when opening his show later that night.

Kip closed his soundcheck set raving about Bruce Springsteen, attributing him as “the guy that really saved my life and the life I was living.”

Much like Kip looks up to Springsteen, his fans look to him for inspiration—something that is difficult for him to believe. But it is knowing this that makes him work harder and has him choosing his lyrics more carefully.

“It’s awesome and it’s scary at the same time, because you realize how much weight your words hold. And when you realize your words hold that much weight, you actually think about what you’re saying a lot more,” Kip says. “It means a lot to me because that’s why I do what I do. I always wanted people to hear my music and I wanted it to impact them in a profound way, so now that it’s actually doing that it means a whole lot to me.”

When asked what the hold-up with his sophomore album is, Kip explains his record label isn’t to blame—in fact as he describes it, they’re “protecting” him.

“People need to understand this is not my record label’s fault,” he asserts. “To be honest, it all comes back on me. I wrote a song, ‘Dirt Road,’ that I thought was going to get further up on the charts and high enough to release a record around, but my label is protecting me in a lot of ways. In my own stubbornness, I just want to put the record out. They know what they’re doing, and it’s hard to release a record around a song that didn’t get past number 40 [Moore’s first three singles all reached No. 1]. And that’s just the fact of the matter.”

So, adds Kip, “hopefully we can come with something next time with some more traction and we can put a record out around it.”

For my complete interview with Kip, visit Radio.com.