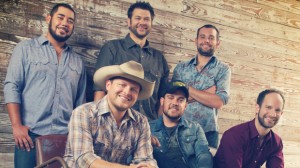 On a regular Tuesday night in New York City earlier this month, country music fans were seen two-stepping along to the Josh Abbott Band. It was almost as if the packed Bowery Ballroom in Lower Manhattan somehow became a honky-tonk in Texas. “I didn’t expect to see a ton of people dancing in New York,” Josh Abbott told me over the phone.

But, according to the frontman, no matter where they go they often see their fans busting a move. “When you come to a Josh Abbott concert you come to enjoy the music, drink a couple beers and do some two-stepping,” he says. “That’s part of what we do and we embrace that.”

Their major label debut is five-song release, the Tuesday Night EP, (out Sept. 23) and is just a taste of what’s to come on the band’s full length debut due out next year. But Abbott hopes their current single “Hangin’ Around,” which he wrote with country hit makers, Shane McAnally (“American Kids,” “Mama’s Broken Heart,” “Better Dig Two,”) and Josh Osborne (“Chainsaw,” “We Are Tonight,” “Merry Go Round”), will be their breakout song.

The EP, Abbott says, is all about having fun. “It’s a reflection back on my college years,” Abbott says. “I wanted it to be something that’s more nostalgic for me and people that have already graduated from college, that they can listen to this and remember that time. Maybe when their life related to some of these songs.”

For more from my interview with Josh Abbott, visit Radio.com.