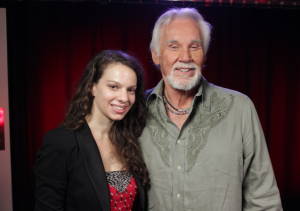 I’m writing this post from a lovely spot in Nashville, Tennessee, called Edgehill Cafe. Fans of the television show Nashville may recognize this name as being the record label home of Rayna James and they’d be correct. Located on the corner of Edgehill Ave. and Villa Pl, it’s also nearby the famed Music Row where many record labels are stationed as well as some songwriting houses.

This October, You Sing I Write celebrated six years. It’s crazy to think of everything I have accomplished since my very first post. Things came full circle last month when I sat down to interview Gavin DeGraw. The very first concert I ever covered back in college, I told him that his show was what initially sparked me to pursue music journalism. Surprised and humbled, he gave me a high-five and we went on with the interview, where he told me the story behind his monster hit “I Don’t Want To Be,” why he chose to pursue music, and his latest album Make A Move.

My friend Sarah highlighted YSIW last month. For the feature, we met up in Brooklyn and she interviewed me. It was strange to be on the other side of an interview but it also reminded me why I first created YSIW six years ago — to highlight bands I believe in. I’ve been lucky to be able to extend this coverage to the outlets I write for, which is more than I ever expected.

The major highlight of October was interviewing Kenny Rogers. He was such a pleasant interview and told the story behind so many of his older hits, meeting Dolly Parton for the first time, and his versatile career.

Another incredible moment this month included a lunchtime concert by Paul McCartney in Times Square. I’m not quite sure when I’ll get another opportunity to see one of the Beatles perform so I made sure I caught his brief gig. McCartney played a 15-minute set showcasing songs of his latest album, New. Tweeting out a mere half hour before he stepped in a truck on 46th and Broadway to perform, hundreds of fans showed up to catch a glimpse and hear some tunes.

I also interviewed Will Hoge, an incredible Nashville-based singer-songwriter, who also happens to have written one of my favorite country songs, “Even If It Breaks Your Heart.” Hoge has been in music for 15+ years and is brutally honest about the industry which was incredibly refreshing. On his tour bus, he told me the story behind “Even If It Breaks Your Heart,” which went all the way to No. 1 for the Eli Young Band.

After six years, I’m so grateful that I still love what I do. I really don’t know what I would do if I woke up one morning and was tired of music. Luckily, I don’t think that will ever happen.