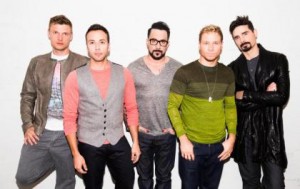 It’s hard to believe nearly six years ago I started this blog with the hope of creating a writing outlet for myself. Six years later, I’ve gone on to find a full-time job doing what I love — writing about music — and freelancing for several publications I’ve always dreamed of working at. This summer once again proved to me that if you’re persistent and work hard anything can happen. Case in point: interviewing the Backstreet Boys.

While I’m well aware that it’s 2013 and the “it” boy bands are One Direction and The Wanted, the Backstreet Boys will forever hold a special place in my heart. Growing up I was obsessed with them. Like, I honestly thought I would marry a BSB. (Brian Littrell if you were wondering). Upon being home in Jersey for Labor Day, some friends and I revisited our middle school and high school yearbooks and the one inscription that pretty much sums up my middle school days was written by a boy in my 8th grade class: “I’ll see ya next year and then maybe you will stop lovin BSB so much.”

Of course, this never happened because in my senior yearbook my mom sent in photos of me with an extremely clever note. She managed to use all the Backstreet Boys song titles to wish me luck in college. Aptly ending the note, “Drowning In Your Love, Mom, Dad and Katherine.”

So knowing all this, imagine my excitement when learning I would be interviewing a Backstreet Boy for work! Last month, the Backstreet Boys were part of CBS Radio’s Impact campaign where we highlight a band’s upcoming album during release week. Since I was writing the post, I’d be doing a phoner with one of the guys. I found out on a Friday night that the interview would be happening sometime Saturday and I could barely sleep. The next day I’d be chatting with one of the guys on the phone and could ask them whatever questions I wanted. My 13-year-old self was ecstatic. Due to the guys busy schedule traveling abroad the interview didn’t happen until Monday. Literally five minutes before they were supposed to call me I learned I’d be talking with Nick Carter. My palms were sweaty and I had butterflies in my stomach. I could not have dreamed this up in middle school.

Nick was beyond nice and answered all my burning questions (his favorite choreographed dance move was “Everybody  (Backstreet’s Back)” just in case you were wondering…). What really surprised me was how open he was. When I asked him how his fiance and the guys’ wives take their avid female fan base he was very frank. “My fiancé actually gets the brunt of it. There are girls out there that send her death threats and tell her they want to kill her and write her name on Twitter and draw pictures of her. We deal with that on a daily basis.”

When I asked how he deals with the death threats he said he just tries to ignore it as best he can.

“If you live your life in fear then they win. For the most part it’s just haters. I think fans don’t like it because I’m the youngest one, I’m not married yet. I’m engaged but I think they feel like I belong to them in some ways. It’s tough. It’s a tough place to be in.”