For 14-year-old Matthew Davidson, music has quickly become a lifelong passion. After he received his first toy guitar at the age of three there was no turning back. Selected to perform at the “Texas 10 under 20 Showcase” as well as playing a list of notable festivals and venues like The New Orleans Jazz Fest and B.B. King’s Blues Club in Memphis, Davidson shows no sign of slowing down.

His debut album Step Up features a blend of rock and blues on each of its four tracks. A mix of cover songs and originals, Davidson manages to make each track his own, often putting his own spin on the guitar parts.

Step Up begins with a solid cover of Jimmy Eat World’s “The Middle.” The song embodies familiar licks of the guitar before Davidson’s softer vocals are heard. While it’s hard to replicate an easily recognizable song and put one’s own spin on it, Davidson manages to do just this and gives the more gritty song a softer feel. The urgency displayed in the original is heard on Davidson’s rendition however the female background singers on the chorus distracts and takes away from the energy and anthemic quality of the song. 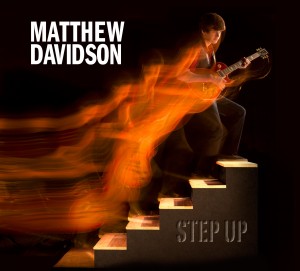 Next track, “Gonna Be My Girl” showcases deeper vocals from Davidson with memorable electric guitar features. Despite an impressive guitar breakdown and his confident singing style, once again the backing vocalists are heard. Though the focus for the most part lies on Davidson, the additional singers continue to divert the listener’s attention.

Bluesier than the previous tracks, “Lie To Me” kicks things off with a memorable guitar introduction before Davidson’s assertive vocals are heard. Hard to believe the song is being performed by a 14-year-old, his talent is evident throughout. It’s on this track that the listener begins to hear his guitar abilities as he demonstrates his handiwork with his fast-paced and soaring rhythms. With backing vocalists that sound more like a gospel choir “Lie To Me” shows just what the previous tracks were missing.

The title of the album and a Davidson original, “Step Up” begins with gritty guitar and distinct percussion. His guitar skills continue to shine throughout the instrumental only track. An adequate glimpse into his future, the song allows him to truly stand out. Though the album would have left a greater mark if Davidson intertwined these impressive solo guitar features into each song allowing each track to be his own, Davidson’s talent is no secret. A remarkable introduction to the 14-year-old, Matthew Davidson proves he’s a force to be reckoned with on his debut release Step Up.