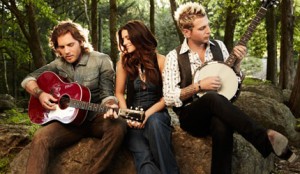 I’ve had this song stuck in my head for days. It has the classic country storyline of yearning for that crush in the eyes of both the guy and the girl and the video brings the tale to life for the listener.

The lead single off Gloriana’s sophomore release, A Thousand Miles Left Behind due in stores Tuesday, is a personal and relatable track and was inspired by real life for one of the band members.

“A lot of the songs on the album are written from the point of view of the person I would like to be,” Tom Gossin said. “’Like on ‘(Kissed You) Good Night,’ my alter ego comes in and does what I’m afraid to do in real life. It’s ultimately a song about not ending up with regrets because the worst thing is to look back on something and think, ‘I wish I had done things differently.’”

The trio’s latest hit recalls another three member country act — Lady Antebellum. With their alternating male/female lead vocals and memorable harmonies the single continues to climb it’s way up the charts. If “(Kissed You) Good Night” is any indication of the band’s upcoming album, it will no doubt be a solid release. I’ll be interviewing Gloriana next week so be sure to let me know if you have any questions and leave them in the comments!

I’ll be interviewing Gloriana next week so be sure to let me know if you have any questions and leave them in the comments!