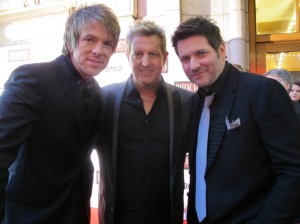 Rascal Flatts have been making music together for over a decade. With eight albums under their belts, it’s nearly inconceivable that the popular country trio almost called it quits.

CBS Local caught up with Rascal Flatts at their film premiere last night (April 5) in New York. The band discussed their latest album Changed, which was released Tuesday, their film and future endeavors. Their eighth studio album and first LP with Big Machine Records, Rascal Flatts said the excitement of album release week never wears off.

“We’ve been more excited about this one then we’ve been in a long time,” Jay DeMarcus said. “We feel like we’ve got renewed energy and a resurgence of the spirit of what Rascal Flatts was about to begin with.”

For my complete review and interview, visit CBS.