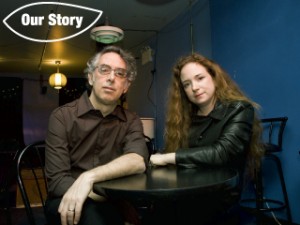 (Editors Note: I interviewed Jennifer Gilson last year for another publication that since folded. Since the article was never published, I thought it’d be helpful for local musicians to know what she looks for when booking acts at the Living Room.)

For over a decade, New York’s the Living Room has been known as an intimate place to witness live music. Co-owner Jennifer Gilson explained that she decided to open the venue shortly after her waitressing job at Sin-é ended when the café closed. The Irish café, famous for where Jeff Buckley performed and recorded Live at Sin-é, booked many musicians, some of who suggested Gilson open her own venue.

“Sin-é had a really low, intimate stage so I decided to keep that. That’s sort of what worked. Artists used to say, ‘This is great. I feel like I’m playing in my living room.’ That’s why I ended up calling it the Living Room,” Gilson said.

While the Living Room boasts well known and emerging talent, Gilson says she likes to maintain a comfortable, friendly atmosphere and on any given night you can expect to hear good music. With that said, she has some suggestions for bands hoping to land a slot on the Living Room stage and explains what she looks for before she books an act. Heed her advice below.

“It’s funny. People used to mail big press kits with their folders, head-shots and bios, sometimes with ribbons. What I would always do is put them to the side and just get my stack of CD’s and start listening. That’s what I do first: I listen to the music. I don’t see if they’re being signed or they can bring a million people or they’re friends with somebody. First it’s the music,” she said.

“If it’s something I like that I think would be great here, then I look into it further and I’ll listen to another song and go from there and see what an appropriate time for them to play might be. Another thing is I’ll listen to it and think, ‘Would I enjoy sitting through 45 minutes of this artist?’ Sometimes you can tell in a measure and sometimes you can tell by the second song.”

This might seem obvious, but Gilson explained this is crucial before she decides to book an act. An artist must sing in pitch, be able to play his instrument and have good lyrics. “I’ll love something that’s solo guitar straight folk and I’ll also love something that has a toy piano and some weird synth stuff and cool percussion. I don’t book one style of music, but it has to be good by my standards.”

3. Be honest about your draw.

“If you don’t really have an audience yet, try to go to open mics or play places that don’t require a larger audience and then build it up. If you say you can bring a certain number of people and then you don’t, we’re probably not going to want to rebook you,” she said.

But, if you are honest and Gilson feels you’re still a great fit for the venue she says “maybe we’ll do something at a time that doesn’t require you bringing a lot of people.” Their upstairs space, Googies Lounge, has a smaller capacity and an artist can play there to build his audience and eventually move downstairs to the bigger room.

“To play at the Living Room you have to play at a particular volume. I have a rule with the staff and sound that if you feel like you have to put something in your ears, then it is too loud and you probably can’t hear the lyrics and you can’t hear the lead singer,” Gilson said. “Why should you protect a part of your body when you go out to have fun? It’s just not necessary and it’s more about good sound. If you have to play loud, then a rock club is probably more your place.”

Once you land that gig, you have to do your own self promotion. “You have to bring people because whether it’s a show that has a cover or whether it’s one of our $10 suggested donation tip jar shows, we need people to buy drinks so we can pay our rent,” she said. “It’s not all about the bodies. First it’s about the music, but you have to get people in.”