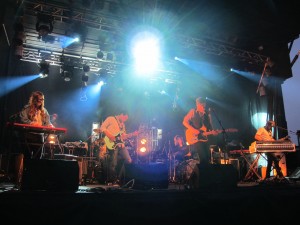 Over the weekend, thousands of music fans trekked to Rouyn-Noranda, a small Québec mining town north of Montreal, for the Emerging Music Festival. In its ninth year, the festival showcased numerous Canadian acts, many alternating between English and French during their sets.

Throughout four days, 60 bands performed in local bars, restaurants and theaters, some who drove several hours just for a 30-minute slot onstage. A communal environment, the bands remained in town for the weekend and it was common to attend a show and stand next to the artist you saw perform the day before.

The festival kicked off Thursday night simultaneously at an outdoor stage on Seventh Street and at local church Agora Des Arts, allowing attendees to run back and forth across the street to witness multiple acts.

Montreal rockers Passwords took to the outdoor space, where locals congregated. Both young and older audience members were taken by the aggressive, lush set, which served as an impressive introduction of what to expect in the upcoming days. 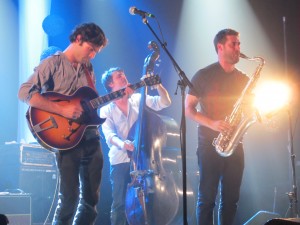 Across the street in an old church, eerie red lighting surrounded the ethereal Muse Hill during their set, which blended jazz, folk, and country undertones. The unique performance included an interview with Hunter S. Thompson blasting from speakers alongside Juno-nominated saxophonist Chet Doxas. The band transformed the church into a 50s jazz revival with a solid cover of Jimmy Giuffre’s “The Train and the River.”