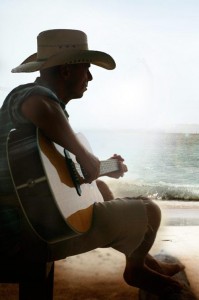 As Kenny Chesney’s first headlining tour progressed, he became more and more intrigued watching his fans tailgate before his show. One day, in 2002, he decided to join them.

“It started purely out of boredom. There are only so many hours you can sit on the bus and watch TV or play basketball or whatever we do to pass the time before we go out onstage,” Kenny admits to Billboard.

“One day we were playing the Amphitheater in Pittsburgh, and it was about halfway through my first year of headlining. My bus was parked on this hill, and I could see all the tailgaters and everybody out there. It was this whole other world out there, so I said, ‘I’m gonna go out there in the middle of it and see it!”