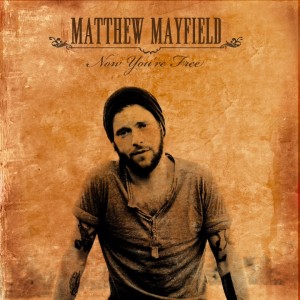 His first full-length album as a solo artist, Matthew Mayfield‘s newest release, Now You’re Free, encompasses 11 standout tracks of raw vocals combined with solid musical interludes and emotional lyrics. His deep, raspy singing style immediately draws the listener in while soaring guitar and percussion round out much of the LP.

No stranger to the music scene, Mayfield released an LP with his former band, Moses Mayfield, in 2007 and recorded eight solo EPs years later. He’s had much success as a solo artist so far, having songs featured on “Grey’s Anatomy” as well as some going to No. 1 on iTunes’ singer/songwriter chart.

“My journey started in 1992 when I fell in love with Guns N’ Roses after seeing Slash get up on the piano for the finale of “November Rain.” When I was 9, I decided I was either going to be a bank robber/surfer or play in a rock ‘n roll band,” he writes on his website. “I’m not brave enough to ride the big waves and not radical enough to rob banks, so here I am with a guitar in my hand. I think my mother is very happy with that call.”

With the help of fans, Mayfield raised $14,000 via Pledge Music by selling handwritten lyrics, living room demos, house parties, guitar tabs, and more. He took to Nashville to record Now You’re Free with producer Paul Moak and writes that the album is everything he wants it to be.

” Honest, anthemic and diverse. The songs are full of hope, which in some ways is very new to me. They are the sound of a fresh start. I’m excited about attempting to change something with this record. It could be someone’s mood for a few minutes, the temperature in their room, or the way they watch the sunset driving down the interstate. Music has changed everything for me. I want to be a part of that for other people.”

Next track, “Missed Me” quickly picks up the pace with electric guitar and a faster paced singing style from Mayfield. While the more uptempo numbers showcase Mayfield’s rocker side, it is his heartbreaking ballads that leave the greatest impact. The beautifully haunting “Fire Escape” paints the picture of a man waiting around for a former flame. With deep vocals, the listener can feel the pain he feels as he sings each word.

Standout song, “Element” has quickly become my most listened to track. The song begins with Mayfield lightly strumming the acoustic guitar before his slowed, soft vocals enter. “I’ve been waiting/Wish I was watching you/In the daylight/A perfect view/This is always a favorite of mine/Said I don’t want to go/ ‘Cause it means I’d have to throw/This element of mine aside/What if I don’t want to be the lonely one/The truth I know is this/I don’t want to miss you more/Than I already do,” he sings passionately. Written when he was 19, Mayfield has said it’s the one song that’s stuck around so long that he still likes.

“Ghost” follows suit with guest vocals by Bo Rinehart of NEEDTOBREATHE. While the track picks up the pace, it continues to showcase Mayfield’s introspection with light strokes of the piano. Guest vocals continue, this time by The Civil Wars’ Joy Williams on “Can’t Change My Mind,” a moving ballad before the upbeat and hopeful “Grow Old With You” closes the LP on a strong note.

Though his first full-length solo release, it’s  hard to tell. Now You’re Free is an adequate introduction to the singer-songwriter’s talent. One can only wonder what the future will bring for Matthew Mayfield. To listen to his newest release and find out when he’s coming on tour near you, visit his Website.