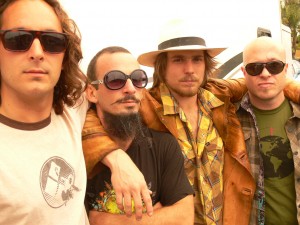 With nearly 270 shows lined up this year, Lukas Nelson and Promise of the Real are taking the world by storm with their debut release, ‘Promise of the Real.’ After a jaw-dropping ‘Late Show With David Letterman’ performance last month and stints opening for Willie Nelson [Lukas’ dad], B.B. King and Dave Matthews, as well as sharing the stage with Steven Tyler, Neil Young and Bob Dylan, the band have already made a name for themselves.

Made up of singer/songwriter/guitarist Lukas Nelson, drummer Anthony LoGerfo, percussionist Tato Melgar, and bassist Corey McCormick, the band sat down with me to talk about their live show (including Lukas’ playful homage to Jimi Hendrix), their advocacy and just what it was like growing up with the Redheaded Stranger as your father. You can read some of my interview below, and for the complete Q&A visit The Boot.

I love the band name. So, just what is this ‘real’ you’re promising?

Anthony: Promise of the Real came from just wanting to be real with our music. You look at a lot of music today and they have all these special effects, smoke-and-mirrors. We’re just trying to keep it like the old-school guys did.

Lukas: It means that we promise to stay true to who we are. We aren’t going to be perfect, and we aren’t going to try and make it so that every show is the same. It means that we’re going to do the best we can, but we’re not going to Auto-Tune our voices. We’re not going to make sacrifices to our integrity as a band because we don’t have to. We want to support ourselves so we can be able to support a family and then after that, we want to give it all back.

Lukas: It changes every time I write a song. Sometimes it’s a hook or chorus, or then it’s a riff and then it’s like chiseling wood. When I was a young kid, I read something that [Bob] Dylan said. He treats his lyrics as if every line could be the title of a song. I thought that was pretty cool. I looked at all his lyrics and took that to heart. I listen to people like Bob and Neil and my dad and Kris Kristofferson and the Beatles, Ray Charles. Those are my heroes, and they influence me, writing-wise.

Anthony: As a band backing up Lukas, when he brings his songs to the table, we try to keep them as pure as we can. Lukas will either write on the road or at home, and we arrange everything the same way — basically on the road. In the back of the bus, we’re arranging music and then we do it in sound check.

Lukas, you’ve adapted Jimi Hendrix’s technique of playing guitar with his teeth. How did that come about?

Lukas: I don’t play all the time with my teeth, but, yeah, it’s a tribute to him and it’s fun to do. It was fun to learn that I could do it. I just tried it one day and I was like, “OK, that’s not too bad. I know where all the strings are and I can pluck them.” I chipped my tooth a couple months ago. People get weird about teeth. They cringe when I do it sometimes. It’s fun to be able to put on a show and not have to rely on special effects. We have enough energy on our own where we don’t need all that stuff.

For more of my interview with Lukas Nelson & Promise of the Real, visit The Boot.