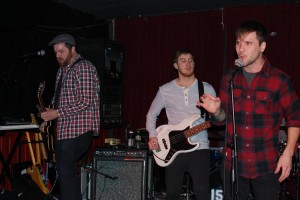 New Jersey’s own The Vinyls impressed a packed crowd at Maxwell’s recently. Though the first band showcased on a Saturday night, the quintet’s high energy set kept concertgoers engaged.

With familiar vocals, a driving drum beat and powerful guitar riffs, the Jersey boys’ set ended too soon. Drew Duddy’s stage presence captivated as his animated facial expressions provided a story that accompanied each song. Though an apt frontman, the musical accompaniment propelled the band from simply an opener to a memorable act.

“Feel free to move around. I know it’s not the venue for a circle pit, but this would be the song,” Duddy said. “This song’s called ‘My Good Name’ and it’s about starting over.” Girls in the front of the room danced along to the fast-paced track while the guys in the crowd raised their beer cups in the air. 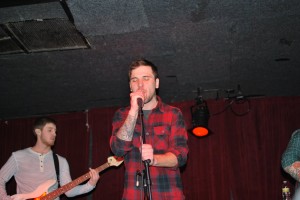 “Loner” demonstrated The Vinyls more serious side. Despite a sordid tale at the song’s start, the storyline picked up mid-track to reveal a distinct optimism.

Current single, “American Dream” embodied a tale many can relate to. With fitting musical accompaniment, Duddy sang, “Every mark we make is a sign of change/I’m not alone in this American dream…I don’t need another let down.”

Hopeful, yet realistic, The Vinyls down to earth roots and relatable lyrics combined with their memorable music and energetic stage presence prove they won’t be an opening act for long.

For more on The Vinyls, be sure to visit them on PureVolume.