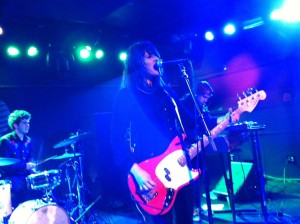 Last year, I interviewed Intimate Stranger before their appearance at SXSW. Currently on tour and gearing up for a few showcases at this year’s SXSW I caught the band’s show Friday night at Brooklyn’s Knitting Factory. Formed in Santiago, Chile, in 2005, Intimate Stranger has critics and music lovers alike raving about their live show.

Frontwoman Tessie S-Woodgate has been named one of the “Leading Ladies of Rock” by Rolling Stone Chile and last Friday she demonstrated just why. With powerful stage presence, her vocals immediately grab the listener. Her singing combined with atmospheric guitar effects, soaring synth melodies and solid drum rhythm had concertgoers energized and dancing along.

Last year, S-Woodgate said Intimate Stranger’s music “has elements of melancholy and a calm motivated energy.” Opening track “Moments” fully demonstrated this energy. With a pounding drum beat and S-Woodgate’s seductive vocals, the band impressed. Their energy never wavered throughout their set as the band segued from one high energy track right into the next. 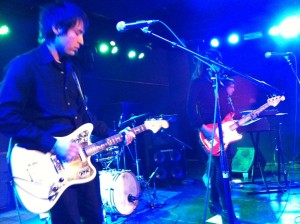 Songs like “Undone” showcase a darker sound for the band while “In the Black” lightened up the mood and consequently, had the entire venue clapping along during a minute long instrumental breakdown. Complete with guitar distortion and deeper vocals, the song was a welcomed change.

Performing just under 45 minutes, the band closed their set with the fast-paced “Beastie Queen.” An adequate track to end their show, I’d be surprised to learn of any concertgoers who didn’t have the song stuck in their head long after the last note was played.

For more on Intimate Stranger, be sure to visit them on MySpace and catch a show when they’re in town.