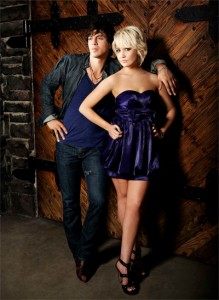 Steel Magnolia’s chemistry was undeniable as they shared the stage at New York’s Bowery Ballroom Monday night. On the eve of their record release, the duo — Meghan Linsey and Joshua Scott Jones — gave New Yorkers a preview of their debut album, released today, 1/11/11.

Meghan, clad in a short black and white striped dress and Joshua in blue jeans and black button down shirt, walked out to screams before they began first song of the night — fittingly, the first track on their album, ‘Ooh La La.’

Throughout their set, the couple of more than five years continually interacted with each other, showcasing just how much fun they had onstage. At times, Joshua would walk, guitar in hand, from his mic stand to Meghan’s, so they could sing with their faces pressed tight against each other. Their harmonies were spot on as demonstrated on every song performed during their 90-minute set.

Whether it was an original or cover song, Steel Magnolia’s energy never wavered. Instead of performing the album from start to finish, the duo threw back to an old favorite for the second song on their set list, the Eagles’ ‘One of These Nights,’ on which they showcased impressive vocal prowess, accompanied by an equally impressive five-piece band.

To read more of my review of last night’s show and find out why Steel Magnolia is You Sing I Write’s band of the week, visit The Boot.

1 reply on “Band of the Week: Steel Magnolia”

Love this duo! Thanks for introducing me.