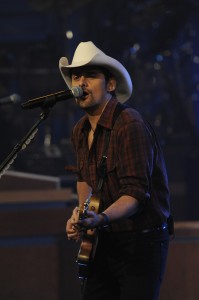 Brad Paisley performed an hour-long set for lucky New Yorkers earlier this month at the Ed Sullivan Theater. For those not in the Big Apple, the concert was streamed live for CBS Interactive Music Group’s ‘Live on Letterman’ webcast, allowing fans to watch the set in its entirety on CBS.com.

Moments before he took the stage, Brad tweeted, “About to go on here at the Ed Sullivan theater. Like the Beatles. Sorta.”

Though he’s in Manhattan for the next few days promoting his new greatest hits compilation, ‘Hits Alive,’ Brad never feels too far from home. “On the way in here, when we were coming in from the airport, we were in an SUV. Low and behold, somewhere right after we got out of the tunnel, we hit this little patch of mud. I don’t know where in the hell that came from. It wasn’t quite big enough to have much fun with with your truck, but it made me miss home,” Brad said before singing his huge hit, ‘Mud On the Tires.’

For my complete review visit The Boot. Watch Brad perform “Then” below.