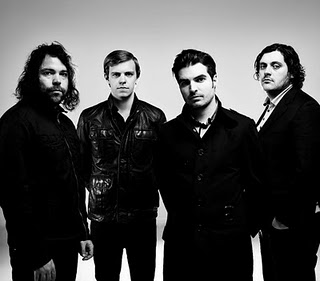 Currently on their first American headlining tour, The Boxer Rebellion have been impressing audiences with their atmospheric rock. With soaring guitar interludes, foot-thumping percussion and frontman Nathan Nicholson’s emotion-fueled vocals, the band captivated all in attendance during their show Saturday at The Bell House.

Performing just over an hour, the UK-based band showcased tracks off their albums, Exits and Union as well as debuted new material from their upcoming 2011 release. The first unsigned band in history to break into the Billboard Top 200 Charts with a digital only release, you can expect to hear much more from The Boxer Rebellion soon.

Currently featured in the film, “Going the Distance” with Drew Barrymore and Justin Long, Nicholson and guitarist Todd Howe confessed in an interview before their set that a lot more women have been showing up to their gigs, not that they mind.

“It’s good to be back in New York…in Brooklyn I should say. I don’t want any people to get pissed off,” Nicholson told the crowd after playing “Evacuate.”

With vocals that bring to mind U2’s Bono and arena friendly musical accompaniment, it’s easy to picture The Boxer Rebellion in a stadium setting. Hard to believe they remain unsigned, their American tour promises to be a success. Both lead guitarist Howe and Nicholson command the stage while bassist Adam Harrison and drummer Piers Hewitt flush out the sound. Throughout their set, the band transitioned from slower ballads to more rock centric numbers effortlessly. In fact, on some tracks each member could be found pounding away on some form of percussion.

Tracks like “Semi-Automatic” slowed down their set with solid instrumental interludes while others, like “Soviets” were a welcomed surprise. Switching gears from electric to acoustic guitar, Nicholson told the crowd that the song is “a kind of country song if there were such a song in our repertoire.”

While the girls were most excited to hear tracks from “Going the Distance” performed, the band managed to please all in attendance. Whether it was the females nearing close to the stage or the men back towards the soundboard nodding along, The Boxer Rebellion satisfied during their gig in Brooklyn. Lucky fans who stayed until the very end of their set enjoyed dancing and singing along with Nicholson when he jumped off the stage for last song of the night, “Watermelon.”

For more on The Boxer Rebellion, be sure to visit them on MySpace and watch a video of Saturday’s show here. Stay tuned for my exclusive interview and concert footage.