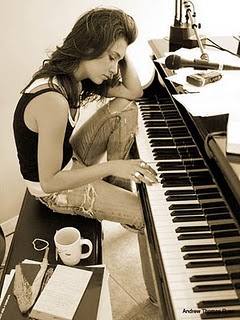 Tamar Kaprelian has been writing songs for as long as she can remember, drawing inspiration at an early age from Disney films and later, music icons Billy Joel and Paul McCartney. However, it wasn’t until she entered and won OneRepublic’s cover song contest in 2008 that labels started to take notice. With Ryan Tedder’s help, she soon signed to Interscope Records and began working on her debut album, due out later this year.

A coming-of-age record that chronicles her life and relationships, Kaprelian is determined to create an album that is real and true to her, both personally and artistically. By previewing a few tracks on MySpace and witnessing her live last night in New York, she is well on her way.

With emotion-filled lyrics and equally passionate vocals, Kaprelian’s music inspires the listener. First single, “New Day” is a song about “struggling, overcoming and having faith in believing that you can get yourself out of the situation.” A relatable track, Kaprelian takes the listener on a journey with her powerful vocals and the tale’s resolution. “I was lost but I found what I was looking for/Waking up, waking up to a new day,” she sings. (Watch the video for “New Day” below.)

Kaprelian’s airy vocals on the upbeat “Delicate Soul” brings to mind fellow singer-songwriter Sara Bareilles while tracks like “Purified” and “Three Simple Words” portray a more mature sound. Never one to shy away from how it all began, Kaprelian performed a soulful rendition of  “A Whole New World” from Disney’s film “Aladdin” last night to a packed and sweaty crowd at Mercury Lounge.

With her powerful vocal delivery, piano interludes and string features throughout many of her tracks, Kaprelian’s music strikes a chord. “Three Simple Words” is a moving ballad of love lost with delicate piano accompaniment and angelic vocals while “Transcend” impresses with soaring string interludes and a deeper, more intimate sound.

Look for Tamar Kaprelian’s debut album due out later this year. Until then, learn about her songwriting process and collaborating with OneRepublic in a video interview below.

Watch Tamar’s winning cover of OneRepublic’s “Apologize” below. For more on Tamar, be sure to visit her on MySpace.

4 replies on “Artist of the Week: Tamar Kaprelian”

She ripped off Joy Williams' "Say Goodbye" for her "hit single" "New Day." They're both on You Tube. Find them and compare. This girl is a fraud.

Tamar, you are an amazing artist, songwriter, and performer.

Do not listen to any negative comments people leave you.

Joy's people really need to stop writing ridiculous comments on your blogs/sites etc. It is petty, immature, and only makes HER look like a terrible human-being.

p.s. joy williams camp: NO ONE KNOW WHO JOY IS.

WE LOVE YOU TK!

seeing you play in Toronto tonight. so excited!