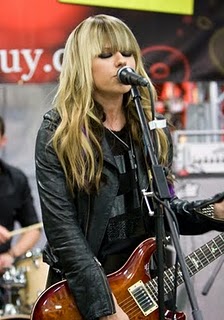 A few weeks ago I featured my full interview with guitar goddess Orianthi. She’s played with all the guitar greats including Carlos Santana, Steve Vai and of course no one can forget her jaw-dropping performance in Michael Jackson’s This Is It film.

I met up with the 24-year-old Australian virtuoso when she was in New York promoting her debut album, Believe, and performing for fans. While she began playing guitar at the age of six, being a female guitarist hasn’t always been easy.

“Guitar is a guy’s thing. I’d get picked on a lot and school wasn’t exactly the easiest time,” Orianthi said. “Actually, my teacher told me I should play the harp, it’s more feminine. It’s kind of like being a male ballerina in a way … I loved playing guitar so much that I stuck at it. I just want to inspire more girls to pick it up and stick at it and believe in themselves with whatever they do. You just have to follow down your path.”

Watch my video interview with Orianthi below to learn more about her passion for guitar, what it was like to perform with Santana and her experience working with Michael Jackson.

4 replies on “Video Interview with Orianthi”

Great interview! Thanks for posting! Glad you shared your experience with us. Keep up the wonderful work! 🙂

Cool Annie! She really is inspiring!

Thank, Annie for sharing this interview. I met Orianthi briefly today during a Best Buy performance and signing. What a talent! It's great to see a woman break into a genre that's been dominated by men for so long.