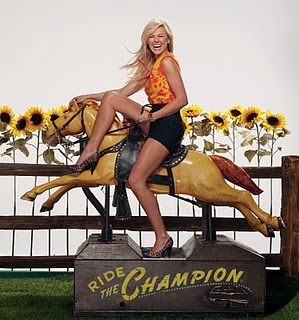 She’s starred in numerous television series and movies as well as acted in on and off Broadway musicals including Legally Blonde, where she was nominated for a Tony Award for her role as Elle Woods. Going back to her love and passion for music, Laura Bell Bundy is releasing Achin’ and Shakin’ and has country fans and critics raving.

A concept album, Achin’ and Shakin’ is two separate albums within one project. Achin’ is a collection of slow and sultry country songs while Shakin’ is a group of sassy songs that are equal parts humor, confidence and attitude.

“I have two different sides of my personality,” she explains. “I have a crazy, wild, humorous, outspoken personality, and then I have a depth that only opens up when I am alone or with one other person, and that is captured with this album. I really couldn’t do one without the other.”

The first single off Achin’ and Shakin, “Giddy On Up” is just a taste of what’s to come for the singer-songwriter. Her first music video, “Giddy On Up” is an entertaining, choreographed tale about a cheating lover. Having already earned comparisons as the Katy Perry of country music, I’m interested to see what the future holds for this country songstress.

Watch the video for “Giddy On Up” below. For more on Laura Bell Bundy, visit her Web site.

That is such a fun video! Thanks for sharing. 🙂