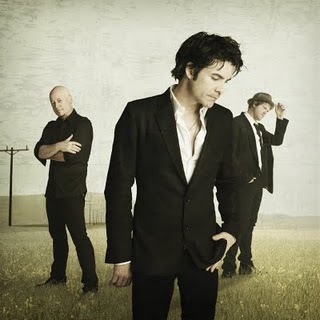 They’ve sold millions of records worldwide, achieved the ever-coveted Grammy for award-winning song “Drops of Jupiter (Tell Me)” and have ridden to the top of the Billboard charts for notable singles including “Meet Virginia” and “Calling All Angels.” Just yesterday Train released their fifth album, Save Me, San Francisco, bound to acquire similar success. First single off the album, “Hey, Soul Sister” is already climbing the charts and seems to be a hit amid fans old and young.

I spoke with guitarist Jimmy Stafford at the start of Train’s 28-city tour. He filled me in on Train’s latest release, embracing the Internet and a younger fan base and the reasons behind their longevity.

After 15 years together, Train continues to make their mark on the music scene. “We love this band. We’re like brothers. We have common goals and interests. We created this band and it’s our lives,” Stafford said. Read on to find out more.

How is Save Me, San Francisco different from your previous albums? Did taking time off help with the writing process?
I think it helped with a lot of things. We were pounding pretty hard for 10 years just going from album and then tour, right back into another album and another tour. I think we all needed a break. Sometimes you need to take a step back to realize what you’ve got. I think we did that. We all went and did our own thing for a few years. And, I think by doing that we all realized what we have here and what this band means to us and to our fans. I think we came back re-energized and feeling stronger about this than ever before. I think we recorded, in my opinion, our best album as a result. We’re all super fired up about everything right now.

What’s your songwriting process like? Did you go about it differently on Save Me, San Francisco?
Yeah, it actually was. It’s always a little bit different. The producers you work with, where the band’s at. This album, we worked with a lot of outside writers for the first time, which I think was a good thing. We ended up with a batch of really great songs to choose from and we also wrote as a band a lot. We just had so much material to choose from at the end of the day that we had to bring in some people to help go through it all and pick the best stuff. When you write a song it’s kind of like it’s your baby, you love them all and you don’t have the perspective of what’s good. So we brought in some great people, our A&R; guy and our management to help us go through everything. That way there are no egos involved. “Well, not enough of my songs made the record.” There was none of that. We wanted to make the best record we possibly could and I think we did that.

Tell me about latest single, “Hey, Soul Sister.”
Pat wrote that with a couple other guys. The story lyrically, I’ve heard Pat talk about this in interviews. He’s always heard of Burning Man. Somewhere in the Californian desert, they do it every year. It’s this whole city in the desert that gets built for a festival that happens every year. They build a huge man out of wood and at the end of the festival they burn it. Pat had never been to Burning Man, but he had an image in his head of what it must be like. All these beautiful women dancing around the fire. That was the imagery he conjured up when he was writing the lyrics to, “Hey, Soul Sister.” It’s a pretty big deal. Thousands and thousands of people go to it every year. People run around naked and I guess it’s a total crazy deal.

Are there any songs you’ve written over the years that hold more meaning to you now than when you first had written it?
That’s an interesting question. There’s a song off our first album called “I Am.” When we wrote it, it was probably one of the first songs we ever wrote together as band and it just seemed like a nice, cool song at the time. We don’t play it live every night, maybe once out of every 30 shows do we do that song, but we did it last night in Seattle. Every time we play that song, as I get older and have spent more years with this band, the lyrics in that song, “Am I the son I think I am/Am I the man I think I want to be,” there are some really nice lyrics that you can’t help . . . I find myself being a little introspective when we play that song.

In a previous interview Pat was talking about the album and said that the lyrics in many of the songs are, “about love in every way you can think about it.” Do you feel you have to be in love to write a love song? Does a song come out better when you’ve experienced it yourself?
I don’t think you have to be in love. As a matter of fact, I think probably some of the best love songs are breakup songs, songs that were written when people were going through really hard times in their life. Pat just happens to be in a really good, happy place in his life and it makes for some very positive songs with positive messages. I think it’s a good thing. We’ve always been a hopeful sort of band. Our lyrics always had a bit of hope into them.

It’s funny, Pat is the type of lyricist that writes lyrics that might mean something to him, and they might mean something completely different to you and I. His lyrics are very open to interpretation. A lot of times I’ll be playing a song every night live and I’ll think it means whatever I think it means to me and then Pat will tell me what it’s about and I’ll be like, “Really? You just ruined it for me!” That’s why I’m not really a big fan of music videos. I think they force a message on the viewer. They’re like, “Oh, I really didn’t want the song to be about that.”

The music industry has changed since you began 15 years ago. Bands can talk directly to fans on Twitter, have their music featured in TV shows. Do you feel it would have been easier if Train came out today?
I think it is easier in a lot of ways for people to reach out to a bigger fan base through MySpace and Facebook and Twitter. It’s been weird a little bit, being in the middle of that. We were a band before all that stuff was around and have had to adjust and crossover into that world. If you don’t change with the times you’re going to get left behind and I think we’re doing a pretty good job of it. Our record company and our management have really helped us move into that arena really nicely. They’ve redone our Web site, which looks great and they have gotten us into Twitter, Facebook and MySpace.

We’re much more in touch with our fans than we were five years ago. It seems to be getting us a wider age range as well. It seems like a lot more kids, and I don’t know if it’s just the nature of the new single “Hey, Soul Sister.” I’m sure it’s partly that and partly that kids are all computer savvy these days. Everybody’s on MySpace and Facebook and if you’re not you’re not really hip as a band. You’ve got to be there. It’s just too big of a deal and there are too many people that can be reached through the Internet. I think it’s a really good, positive thing for us, and for new up-and-coming bands. You have to take advantage of that.

What do you feel is the reason to Train’s longevity?
I don’t know that there’s a secret to it. We just love doing what we do. We love this band and we love each other. Pat, Scott and I have been together for 15 years now. We all have the same goals and we want this band to succeed. It’s all about the music. We enjoy the music that we play, we love recording it and we love going out and playing it live. As long as our fans keep loving it too and keep coming out to see us play live, I don’t see why we’d ever stop doing it because it’s a pretty good job. We’re really fortunate to be able to do this, to do something that we love to do and have other people love it too. We just keep stretching, we keep trying to grow as human beings, as musicians and as songwriters and we keep trying to do what we love to do and people know that. People get the positive message that we’re trying to put out there and it has kept us around.

Is there one thing you wish you were told about the music industry when you started?
I don’t know about that. The music industry has been pretty good to us along the way. It’s a business. I think when we first started out it took us a while to learn that. Record companies . . . it’s a business if you’re not doing your job you’re going to get fired. We’ve been with Columbia Records for every record from the beginning. They’re our family and I think they think of us as family too. We’ve had a really good ride with them. It’s worked out well for everybody I think.

Do you have a favorite track on Save Me, San Francisco?
That changes every day. I really like a song called “Breakfast In Bed.” That’s my favorite track today. That song is sexy. There’s a certain sexiness to it. “Marry Me,” the album closer, I can just see that song being played at everybody’s wedding next year. The new wedding song. I like them all, I feel like we’ve made our best album. There’s not a song on the record that I would take off.

Thanks chica! Glad you enjoyed 🙂

This exact same interview is on Marie Claire's website! I was disappointed that it was hardly anymore than a couple words different! Lovely interview, hope no one stole anything from you!

love the site just looked at the Train interview looks like a band id like to see. good luck!