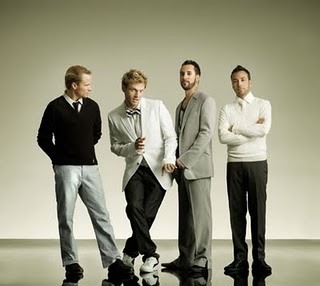 Do you remember the first band you fell in love with? You’d save up every penny of your allowance to see them perform — even camp out overnight for a chance to buy tickets to their show. For me, that band was the Backstreet Boys.

I’ve been following BSB since the seventh grade and can’t count the number of shows I’ve been to. While my friends are glad to see my music tastes over the years expand, there will always be that little spot for BSB in my heart (I know, so lame!).

Their sixth studio album, This Is Us, was released today and due to Brian Littrell’s diagnosis of swine flu, the band have canceled their appearances for the next few days (see video below). Consisting mostly of dance tracks produced by Max Martin, T-Pain, and Ryan Tedder among others, This Is Us, strays from the strong ballads longtime fans know and love.

Perhaps trying to conform to the trend of Auto-Tune and club hits that have been storming the charts as of late, the album is a departure from that classic Backstreet Boys sound. In fact, at times it sounds like they’re trying too hard. While This Is Us is far from the boy band days of the 90s, it’s their popular ballads of that era I’ll continue to remember.

Did you pick up the new album today? What are your thoughts of it? Who is your favorite band and what’s the craziest thing you’ve done to buy tickets to a show?