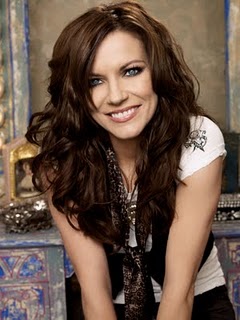 Martina McBride‘s career is what dreams are made of. Each release garners more recognition and her fan base is greater than it has ever been. A veteran to the country music scene, McBride has been belting out hits for the past 17 years. Not to mention her current single, “I Just Call You Mine,” from her tenth studio album, Shine, has been referred to as the wedding song of the summer.

With over 18 million album sales, 22 Top 10 singles, and raising thousands of dollars for YWCA, a domestic violence shelter in Nashville aimed at empowering women and eliminating racism, McBride is an inspiration to women everywhere. “It’s so important for women to support other women. It should be like a family. We should be out there rooting for each other and helping each other out,” she says.

I was lucky enough to chat with McBride at the YWCA auction as well as sit in on her press conference at this year’s CMA Music Festival in Nashville. Of her YWCA celebrity charity auction, McBride said, “This event goes to help women and children really start over and rebuild there lives in a positive way and I just think that that’s important.”

Read on for more on Martina’s musical collaborations, her signature wine, and upcoming fall tour.

Can you tell us about your Twittering frenzy?
Is it really a frenzy? I discovered it about 2-3 months ago. It’s really fun. I’m really enjoying it. I don’t try to overdo it, I check in a couple times a day. It’s a cool way to keep in touch with your fans.

You’re not a big fan of flying. How does touring in the UK go for you?
You know, I’ve gotten better. There was a period of time when I was really paralyzed by it, but I’ve gotten a lot better. I flew to Italy last year. Especially when there’s something really worthwhile on the other end and it’s worth the plane flight, I’m okay with it.

Your YWCA fundraiser is this Saturday.
We’re doing the YWCA celebrity auction on Saturday. It’s our 13th year to do it and it just gets bigger and better every year. All the proceeds go to the domestic violence shelter here in Nashville. I’ve heard testimony after testimony that it’s really changed a lot of lives. It’s a place where women and children can go and get a fresh start and get the support that they need to start rebuilding their lives. So, I’m proud to help with that.

I heard you’re putting a tour together. Will it be more arena based?
Yup, we’re going to be going back to arenas. Last summer we did the amphitheaters outside. This fall of course we wouldn’t be outside in amphitheaters in November, so we’re going to be in arenas. I haven’t really started or seen any drawings yet or anything. The thing that is cool, is usually I put out an album and we go right out on tour. This time I do really feel like I have a lot of time to really plan and create a whole new show. We toured so extensively on Waking Up Laughing, even went back to markets a couple times. I really want to create something that’s a whole new experience for the fans.

You recently released the 2006 Martina McBride “Signature Series” wine. What made you take your passion for wine to the next level to have your own line?
It’s funny. We have Blackbird Studios and there’s a Blackbird Vineyard. So, when we were in Napa we stopped by and checked it out and met with the owner. And, really just sat down over a glass of wine and said, “We have the same name. It’s kind of a coincidence. If you ever want to do a signature wine, we’d love to do that.” About a year went buy and he called and said it was the right time to do that.

Can you explain your wine?
It’s really good! I’m not really a good wine speaker, but it’s a lot of fruit. It’s a Cab. It’s a blend of Cab and Merlot and some other kinds of wines. I love it because it has a little bit of chocolate. It’s just a little bit sweet, lots of jam and fruit. A fruit forward is how I think I’d say it.

You had the Jonas Brothers in the studio. Was that a business decision or were you trying to impress your children?
Well, we’re so happy that he came to record in the studio. Of course Delaney and Emma were very, very excited. John said right up front, “I want to tell you, we will try for our daughters not to stalk you while you’re here.” They were actually really good. They ran into each other, but Delaney was very poised. It was great to have him there.

How did you become collaborative with them?
Well, I got to sing with them when they were here in Nashville at the Ryman. They asked me to come sing with them onstage so I got to go to rehearsal, hang out a little bit. They’re really serious about their music, really sweet kids. Got to meet their parents. I wouldn’t say we hang out and are really close friends, but we have connected quite a few times.

How has music festival changed or evolved since you started?
Well, there is the obvious change that it’s not at the Fairgrounds anymore. Sometimes I miss that. There is a certain charm about it being at the Fairgrounds. It’s gotten bigger, we obviously can have more and more fans come every year. So that’s exciting, that we have more room for fans to enjoy what I will always call Fan Fair.

What is your advice to women accomplishing goals and overcoming obstacles?
Perseverance and support. If you can get support from your friends or from your family, that’s important.

You’ve been in the music industry for a while. What keeps you motivated?
I love it. This is my dream, ever since I was a little girl. For me, every minute that I get to do this is a dream come true.

When you’re writing your material, do you feel a song comes out better when it’s based on a real person or experience or fantasy?
I think it’s a little bit of both. I’ve done songs that are obviously about my life and I’ve done songs that are story songs about someone else. The most important thing is that you connect with the lyrics and it feels honest when you sing it.

Be sure to visit Martina’s Web site for upcoming tour dates and for more on YWCA, visit their site here.

Great interview, always loved Martina's voice. I think she has one of the best voices in music, able to have power when needed but doesn't try to overpower every song. Didn't know that she had collaborated with the JOnas brothers…but if she promises not to do it anymore I'll forgive her. (chuckles) Thanks for the interview!

Couldn't agree more, I absolutely love Martina's voice. As for the Jonas Brothers, I can't make any promises… haha

Martina when are you comeing to Albany N.Y. I wanted to go to the concert in Worcester but I can't. Can you extend the Shine All Night Tour and come here to Albany I Love You and my dream is to see you live and meet you.

I forgot to say when I said Albany N.Y. I meant I want you to sing at the Times Union Center.
Love You