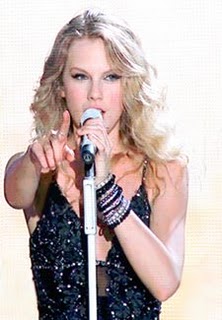 Her music is embraced by country and pop fans alike, but she never fails to display her country roots — always wearing a cute sundress and cowboy boots. Having recently recorded with Def Leppard and showing the world her impeccable rap skills (who knew?) with T-Pain at the CMT Awards on cleverly titled, “Thug Story,” Taylor Swift is the only artist I know who has five-year-old girls and 25-year-old women equally excited about her music.

At the CMA Music Festival in Nashville, Tennessee, even Reba McEntire was singing her praises. Of Swift, Reba said, “I’m thrilled to be in the same business as she’s in because I’ve learned from Taylor. She’s a very smart, old soul and she’s very in tune with what’s supposed to be going on. She knows how to think. She has a very great business sense so I like to eavesdrop in on what Taylor’s doing. I always learn something.”

Did I mention she’s only 19? Taylor Swift is known for wearing her heart on her sleeve, whether it be in her lyrics about ex-boyfriends or simply her interaction with her fans — hundreds, of which, camped out to meet Taylor at her autograph signing. And, by the look of it, Taylor Swift won’t be going anywhere anytime soon if her fans have anything to say about it. Read on to learn more about collaborating with T-Pain and John Mayer, her writing process and how she feels about her fast-paced lifestyle. 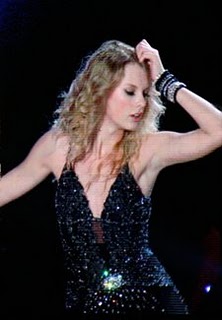 Earlier this week, Reba McEntire talked about the music industry and people in country music she looks to for inspiration and she mentioned you.
Wow. That’s the coolest thing I’ve heard in a really long time! It better be true! Reba is absolutely one of my favorite people on this planet. I think that when you’re making your way up in the music industry you have all these heroes and the reasons why they are your heroes are one thing. As soon as you get into the industry your guidelines change a little bit. For me, my heroes now are great people first and great artists second. People on that list for me are Garth Brooks, Reba McEntire and Faith Hill — people that I just feel strive to be great people and kind people first before anything else gets factored in. To hear something so wonderful from one of those people on that giant, huge, amazing list, that’s awesome. I love Reba!

It seems like you’re going 100 miles an hour right now. Is this too fast or just right for you?
This is just right for me. I’m loving it. I played Atlanta last night and got in at 3 a.m. this morning and then went straight to the Convention Center to sign autographs for five-and-a-half hours and that’s the way I want to live my life. This is absolutely my favorite time of year. I remember when I was 14-years-old and was holding a clipboard interning at the CMA Music Fest, just feeling like if there was ever a chance that one day people would line up to have me sign something of theirs, then that would be a really, really good day for me. I’m really happy to say that today was that day and it’s so wonderful to get the chance to do this.

What role does faith play in your life and your career?
I definitely know that there is someone looking out for me. And, for me it’s just wonderful to know that all of this has happened. There has to be someone up there holding all the cards because I could have never done this on my own.

Thanks to Twitter we know that you may be doing something with John Mayer and T-Pain. Could you talk about working with those artists, the freedom, and what’s that like for you creatively?
I love making new friends and I respect people for a lot of different reasons. For me, great music doesn’t just have to fall into one category or one genre and I love appreciating all kinds of music. Country music is obviously my favorite and that just goes without saying. But, I’ve always loved John Mayer and I think T-Pain is brilliant. Getting to work with people like that has been really, really fun for me. It’s something that I’ve always wanted to do and the fact that country radio has been so wonderful to me and has remained so true to me despite the fact that I’ve gotten to go and do all these things that I’ve dreamed about doing. It’s just been a really, really cool thing.

Your music is so personal; it’s almost like writing in a diary. Do you remember the first time you performed and were you nervous that the person you were singing about was in the audience?
For me, writing a song, I sit down and the process doesn’t really involve me thinking about the demographic of people I’m trying to hit or who I want to be able to relate to the song or what genre of music it falls under. When I sit down and write a song the only person that I’m thinking about in that room is the person that I’m writing the song about and what I want them to know and what I wish I could tell them to their face, but I’m going to say it in a song instead. So, for me, music is really more about a diary and a confession. I love it. I love getting to say things to people that I wouldn’t say to them if I was standing face to face with them. Music is a way of verbalizing those things that I feel that I can’t say.

What country song do you relate to most?
I have favorites. My top favorite country songs are “Run” by George Strait or “You Were Mine” by the Dixie Chicks or Faith Hill “Breathe.”

What was the craziest thing you’ve had to sign?
I’ve had a lot of interesting things like a turtle shell with my face painted on it. That was the winning touch. But today, my fans know me so well and they get me awesome presents. This girl brought me this bracelet [that I’m wearing] and I really like it. A lot of the jewelry that I wear and that you see me wear are fan gifts because they’re so awesome and they give me great presents.

Thousands of girls are running around in sundresses and cowboy boots. Is this a fashion phenomenon for you?
Yes! That’s awesome. I wasn’t trying to start anything. I wasn’t trying to make people dress a certain way, but seeing girls coming to my shows wearing sundresses and cowboy boots and curling their hair is one of my favorite experiences ever because I remember when I was weird for dressing the way that I dressed and I was weird for having curly hair. It’s really fun to see that I’m
not that weird anymore.

What do you do to keep from burning out?
As far as burning out, I get tired a lot, but I never get tired of it. Because for me, I remember when I was a little kid and I used to sit there and think about how lucky I would be one day where people cared about the words that I wrote or how lucky I would be if someday I was just walking through the mall and saw some little girl walking by with my face on her t-shirt.

When you spend so much time daydreaming about things like that, when that actually happens you don’t ever complain about it. When I go to a restaurant, yeah I know that a line is probably going to form in front of the table, but didn’t I always wish for that? Yeah, I did. So it’s like, I never want to be the girl who wanted something so bad her whole life, she just wanted one thing, and then gets it and complains about it. I’m not going to be that girl. 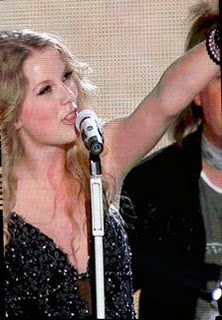 You can also read this interview on MarieClaire.com here.

nice Q&A;, Annie! and thanks for tuning me in to her "Thug Story" video. still not crazy about her voice or her music – but i have new found respect for her after watching that.

Great interview! Taylor seems like a genuinely nice person. I hope she has a long career in the biz.